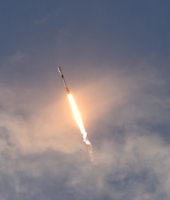 The dollar amount of a contract awarded to SpaceX by the U.S. military.

SpaceX has been awarded a contract worth nearly $150 million to help the U.S. military develop a constellation of satellites that would persistently monitor the globe for missile attacks. The network will take advantage of small satellites spread out in low-Earth orbit, similar to SpaceX's Starlink internet program.

Global access — Starlink promises to offer near-global broadband coverage by using a large number of small satellites — SpaceX has plans to deploy nearly 12,000 of them into space, with a potential extension to 42,000 in the future. Because of their size, Starlink satellites can be sent up with the payloads of other customers. Someday the satellites are supposed to communicate with one another through laser transmission, allowing data to traverse the world at nearly the speed of light.

SpaceX has already begun opening up access to Starlink to some beta testers, and in early tests it has offered download speeds great enough to stream multiple HD movies at once.

Space-based defense — The U.S. wants to build out a similar network of satellites called the "Tracking Layer" that could quickly be deployed and provide redundancy in the event that other systems watching for missiles are attacked by adversaries. The Department of Homeland Security has long warned about nation-state actors targeting internet-connected infrastructure on the ground.

A large amount of satellites spread out over the globe would also allow for precision tracking of missiles. Currently, satellites can detect a missile launch and calculate a trajectory but they cannot track it during flight due to a limited field of view. Ballistics could theoretically be dropped mid-course, so the Tracking Layer could spot that and provide information to defense systems on the ground.

Defense contracts are a highly lucrative business, so this project could lead to even more opportunities for SpaceX in the future beyond merely offering launch services. President Trump has been particularly interested in space-based defense, having created the U.S. Space Force as a branch of the U.S. Armed Forces with the mission of defending America's interests from space.