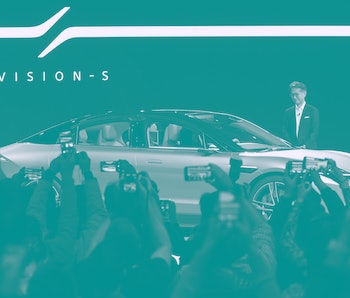 We appear to be finally rounding the bend when it comes to major car manufacturers making the concerted, long-overdue transition to large scale electric vehicle production. Just yesterday, Hyundai announced its intention to add another 17 EV models to its fleet by the end of the decade, and now Honda has shared its own major plans less than a day later: We’re getting Sony PlayStation Wagons, y’all!

Alright, probably not exactly that, but Honda is in the early stages of forming a wholly new car company alongside Sony that aims to release its first EVs to market in 2025. According to the official press release published earlier this morning, both companies have signed a “memorandum of understanding” outlining their shared hope to create a new company leveraging Honda’s EV and mobility expertise with Sony’s “development and application of imaging, sensing, telecommunication, network, and entertainment technologies.”

Although the new company is expected to plan and design the new EVs, production will still take place at Honda facilities. The deal is far from complete, of course, but both sides signal they hope to finalize plans and announce the new venture by the end of the year.

A slight route adjustment from Sony — While the Honda-Sony partnership is certainly big news, it’s not entirely surprising. We’ve been hearing rumblings from Sony about entering into the EV market for a few years now. Back in 2020, the company unveiled its first concept car, the Vision-S, which was already a thing of beauty, and just recently rolled out the Vision-S 02 prototype in January. Although Sony used the Vision-S 02 debut to announce its plans for a project called Sony Mobility aimed for later this spring, it looks like Honda swooped in with an idea of its own that changed the company’s mind.