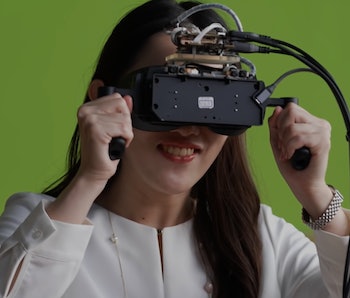 Sony hasn’t even fully revealed the extent of the forthcoming PlayStation VR hardware, but the company is already dreaming far beyond the current generation of immersive gaming. This week, at its annual Technology Day, Sony showed off a virtual reality headset with 8K resolution — a prospect basically unheard of by contemporary standards.

The headset is very much a prototype, as you can likely tell from its vastly unpolished look. The prototype is nonetheless an impressive achievement; it uses two individual 4K microdisplays to create a fully immersive 8K experience. The prototype’s visual fidelity is by far its most impressive offering, but the engineering team has also managed feats of incredibly low latency that should make gaming on it almost unreal.

If there’s anything to complain about here, it’s that we probably won’t actually be able to purchase such a high-res gaming headset for years. This is essentially next-next gen VR, and we haven’t even had the chance to play around with Sony’s current generation of VR for the PlayStation 5 yet. We haven’t even really seen it yet.

Not quite ready — Okay, so the headset shown off at Sony’s Technology Day is not ready for public use. It’s a mess of wires right now, and it doesn’t even strap to the tester’s head; it has to instead be held onto their face with both hands.

The demonstration manages to inspire nonetheless. The tester doesn’t show off gaming on the headset (their hands are a bit busy for that), but the scene explored via the headset — the leather interior of a car — still impresses the tester, especially in the level of detail they can see. Reading small text like the car’s odometer is significantly easier in 8K and higher pixel density.

The microdisplay technology shown off here is made possible by multi-pixel and miniaturization technology Sony has developed specifically for this use. That technology could enable uses for VR that just aren’t very comfortable right now, like completing work in virtual spaces.

Still waiting on that other headset... — This demonstration is proof Sony is thinking about virtual reality as a long-term investment. While we wait for 8K VR headsets to hit the mainstream, the company has some other surprises in store for consumers in the interim — namely the next generation of PlayStation VR.

Second-gen PS VR is happening — Sony has already confirmed it. Otherwise, details are still pretty scarce on the technology. We know more about the new PS VR controllers than about the headset, actually. The most we’ve heard about the forthcoming PS VR headset is that it will use OLED panels rather than cheaper LCD ones.

Analysts don’t expect next-gen PS VR to launch until at least the end of 2022, which means headsets like this prototype are much, much further out. But hey, maybe we’ll actually be able to buy a PS5 by then, if we’re lucky.