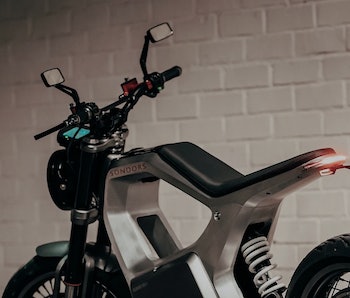 Sondors’ affordable electric motorcycle could be yours to ride as soon as March, according to the company’s founder. Production of the Metacycle (no relation to that company) is expected to begin on February 17, with the first 2,000 units completed by the first week in April.

The news comes courtesy of the YouTube channel “VR IN A RVvan,” which landed a short interview with CEO Storm Sonders on the floor of the Los Angeles Auto Show (h/t Electrek). Sonders’ production estimates are just that — estimates — but they’re much more information than the company has provided until now.

Preorders for the Metacycle went live in January, with original shipping estimates in the range of Q3 of this year. By September, Sonders knew the deadline would be all but impossible to meet. The company then delayed shipments to the end of 2021… an estimate that, once again, has proven a bit too optimistic. Maybe this time will be different?

March, maybe — Sonders has not put out any official statements about when pre-ordered Metacycles will begin arriving, so it’s best to take this somewhat casual interview with a grain of salt. Sonders comes across as pretty sure about his estimates, but then again the company seemed so the last few times it sent out planned shipping dates, too.

If you’d like to feel optimistic, though, Sonders estimates that the first Metacycles will be available in Asia by the end of February 2022. He says electric motorcycles should arrive in the U.S. by the end of March. If all goes well, that is.

An e-motorcycle for everyone — The original Metacycle concept unveiled earlier this year has been tweaked in the intervening months — hence the production delays. One of Sonders’ biggest promises to consumers, the Metacycle’s very low $5,000 price tag, is one of the casualties of those changes. The motorcycle is now expected to start at $6,500, a 30 percent increase from previous quotes.

The price increase isn’t exactly a surprise; $5,000 always seemed mighty low for what Sonders had planned. And the 30 percent hike still puts the Metacycle at a significantly more affordable price than competitors like the Zero SR.

The Metacycle’s other major draws, like a top speed of 80 mph and a range of 80 miles on a single charge, remain intact. The only question remaining, really, is when customers will actually get to ride it.