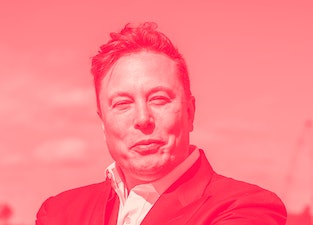 The total value of bitcoin a German man lost to fraudsters posing as the Tesla CEO.

The BBC has reported on a German man who was duped into sending $560,000 worth of bitcoin to a Twitter user posing as Elon Musk. Under a scheme that’s been dubbed the “giveaway scam,” social media accounts pretending to represent famous individuals promise that anyone who sends cryptocurrency to a specified wallet will receive double the amount back. That of course never happens, leaving victims out of bag. Musk’s Twitter is particularly prone to being flooded with these scammers.

The billionaire recently aligned himself with cryptocurrencies, having moved his electric car company Tesla to buy $1.5 billion in bitcoin. He also frequently references crypto on his Twitter account and yesterday announced he would sell a music track on the blockchain. It’s not totally unheard of that the eccentric CEO would run some type of giveaway involving cryptocurrency. That makes him a good vector for fraudsters to run the scheme.

Wild west — The way he describes it, the German man — who understandably wanted to remain anonymous — saw a reply under one of Musk’s tweets that appeared to be him continuing a thread. The tweet included a link to a professional-looking page that described an offer in which people could send Musk bitcoins and receive twice the amount in return. The webpage was actually just a Medium article authored by an “Elon Musk” who had nothing to do with the real Musk.

According to the BBC, the man’s loss was the biggest single amount in the history of giveaway scams.

Cryptocurrency scams have become a rising problem due to the irreversible nature of digital currency transactions. By the time a victim realizes they’ve been tricked, there’s no way to get the money back. Under a regulated monetary system, banks and payment processors can cut off or seize accounts associated with fraud, and criminals running scams can be charged with wire fraud.

But cryptocurrency is decentralized and largely unregulated by nature — wallets are not held at a bank or other entity, and there’s no central authoritative body that can take action to seize a crypto wallet when fraud has been committed. The unregulated nature of cryptocurrency has been touted as a feature — authoritative regimes cannot seize your money — but it also comes with obvious drawbacks.

Fungible scams — Last year, Twitter was hacked by a group of young adults who managed to gain access to the accounts of major figures including Musk and Bill Gates and even former President Obama. Once inside, they used their access to promote these types of bitcoin scams in hopes of pulling in some big winnings — though the FBI has said they only managed to net around $100,000 in proceeds before Twitter cut them off and blacklisted the wallet addresses from being shared.

Needless to say, the old adage continues to ring true: if it seems too good to be true, it probably is. Elon Musk isn’t going to magically make you rich just because you send him some money. It’s a classic scam, folks.