Someone in a jetpack flew right beside airplanes at 3,000 feet near LAX

The pilot of American Airlines flight 1997. 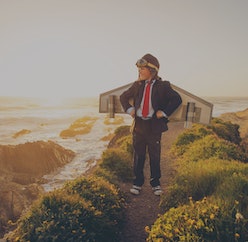 Ground control at LAX had the unusual job this weekend of alerting pilots to beware of "a person with a jetpack" flying around incoming planes. NBC Los Angeles says two separate pilots told ground control they passed a guy in a jetpack as they approached the airport. One pilot said the individual was flying at the same altitude as the plane, about 3,000 feet in the air.

'Only in L.A.' — An air-traffic controller responded to one of the pilots by saying, "American 1997, OK, thank you for the update. Left side or right side?" On the left side, the pilot said, "at maybe, uh, 300 yards or so, at our altitude."

After warning a JetBlue pilot to watch out for the Tony Stark-like figure, he quipped, "Only in L.A." LAX has also had many issues with people flying their drones over the airport. Consumer drone companies eventually responded by programming their craft with geofences that prevent them from entering such restricted airspace.

Jetpacks are a bit more novel, mostly known for being offered in tethered experiences where the wearer flies over bodies of water, for safety. But there do exist jetpacks on the market that could fly alongside incoming planes. Jetpack Aviation sells a model powered on diesel fuel that can reach a max speed of 120 mph and a height of 18,000 feet.

To infinity and prison? — Of course, unauthorized flying over airports is highly illegal and dangerous, so you shouldn't do it. If the individual is found they could face some hefty jail time — unless they just, you know, fly away.

The Federal Aviation Administration confirmed it's investigating the reports.