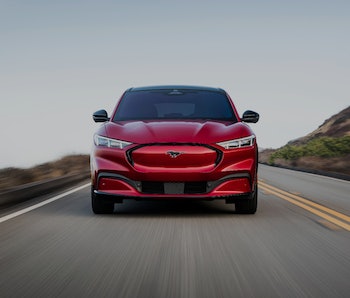 Early owners of Ford’s new Mustang Mach-E electric SUV are experiencing a tricky problem. Under colder weather conditions, the vehicle will sometimes fail to start, even if the battery pack has been fully charged. Yikes.

Following delays, Ford recently began ramping up deliveries of the Mach-E to early buyers. The vehicle is important for Ford and the electric movement as a whole because the Mustang branding could help it find immediate mainstream appeal, especially amongst buyers of muscle cars who might not associate electric cars with toughness.

Ford suggests that owners in cold areas can leave their Mach-E plugged into power while it’s warming up to ensure the smaller battery remains charged.

Growing pains — These types of issues are expected to arise as the major automakers begin introducing vehicles on modern electric platforms. The combustion engine motors in a typical Mustang have been tried and tested over many years, but Ford doesn’t yet have much experiencing producing electric vehicles at scale. No one really does, aside from Tesla, and it’s had quality control issues of its own.

As more consumers get their hands on electric vehicles, real-world testing is revealing various battery issues. Hyundai was recently forced to recall its Kona EV over concerns that its implementation of fast-charging could cause battery fires. Tesla’s cars have occasionally burst into flames following impact to their batteries. Combustion cars also experience fires sometimes, but the concern surrounding electric vehicles is when the batteries experience issues seemingly at random.

Tesla has begun developing its own battery technology in-house that it hopes will differentiate it from the new onslaught of legacy competitors who have many more years of experience with the rest of the car manufacturing process. It also has other things going for it, like a vast network of proprietary charging stations. But its vehicles have plagued with other quality control issues over the years, like misaligned doors and dashboard computers that die at random. So a small issue with the Mach-E’s charging in cold climates shouldn’t be a death knell for the vehicle.

Repairs needed — Unfortunately, the issue with the Mach-E’s battery cannot be resolved with an over-the-air software update, meaning that owners need to bring their vehicles to a dealership for repair. Only a “small number” of the 7,000 vehicles delivered thus far have the issue.