To fully realize this idea of computing overlay directly on to the world will require a new device. A completely new kind of camera that is capable of rendering digital content right in front of us... 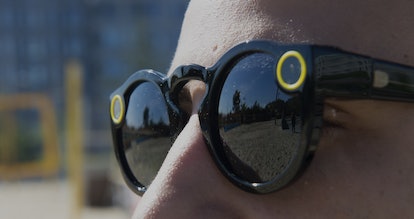 Snapchat has all but confirmed that it will release augmented reality glasses in the future. The company been investing in AR for years, starting small with filters that overlay on people’s faces in selfies to create fun effects. But new smart glasses coming on the market promise to enhance the human experience by putting digital content in front of a person’s eyes all the time, and Snapchat made it clear during its recent earnings presentation that it intends to be at the forefront of this shift.

Virtual try-on — The company has already demonstrated how augmented reality can generate money and offer value to users. Its "shoppable" Lenses allow users to try on fashion pieces from the comfort of their home. Last year Champs released a filter where users can test out and purchase Nike's Air Vapormax 2020 Flyknit without leaving the app.

But Snapchat recognizes that this is limiting because you're still constricted to looking at the world through a phone.

A change is coming — "Advances in technology will change this," said Snapchat chief technology officer Ryan Murphy. "Overlaying digital experiences directly in our field of view and empowering us to engage with computing the same way we do as humans, with our heads up looking out at the world in front of us. Our ability as humans to transmit ideas will improve dramatically with information and entertainment directly in our line of sight."

You can sort of see what Murphy is talking about in the Champs screenshot above. It's not exactly the same as trying out shoes in real life, but it's impressive how well the look of the shoes translates. The idea espoused by proponents of AR is that many ideas could be easier understood if digital objects were transported into your surroundings.

Spectacles as the foundation — Murphy added that the company's Spectacles product will serve as the foundation for its AR future. The stylish glasses sport two cameras and are capable of capturing 3D photos and videos. They don't feature any type of display, however, simply capturing content that's then transferred to a smartphone. But someday they will likely be able to overlay content on the world.

"Spectacles is our investment in this future," he added. "It's an opportunity to design and develop a device specifically for augmented reality. We're doing this incrementally by building and releasing increasingly more capable devices that are connected to the Snap platform."

Apple CEO Tim Cook has been similarly enthusiastic about AR, saying that he believes the technology will someday pervade people's lives in the same way that smartphones do today. He thinks that AR can enhance human connection in a way that virtual reality (VR) cannot, because with AR people can collaborate and share 3D digital experiences while still looking at each other. The company is rumored to be developing AR headsets; Facebook has confirmed that it's making AR products of its own.

Advertising — More than 200 beauty brands have uploaded 3D representations of their clothes to Snapchat, where users can "try on" their wares. Snapchat says that its users have tried on products more than 250 million times, and that those users were 2.4 times more likely on average to click purchase afterward than users who didn't do any digital try-ons. It's not hard to imagine that AR could be the next big advertising platform. At least with Snapchat, unlike Facebook, we can expect less data on users to be collected and shared with advertisers.

As part of its earnings call, Snapchat presented an optimistic outlook for the years ahead, saying it expects revenue growth of around 50 percent for the next several years. That's a strong turnaround for the company that people once thought was destined for an early grave thanks to copycat product Instagram Stories. The company remains much smaller than Facebook, of course, with 265 million daily users to Facebook’s two billion. But co-founder and CEO Evan Spiegel must thank his lucky stars each day he turned down Zuckerberg's various offers to buy the company because it's clearly not going anywhere, and it worth far more than the $3 billion reportedly offered for it back in 2013.