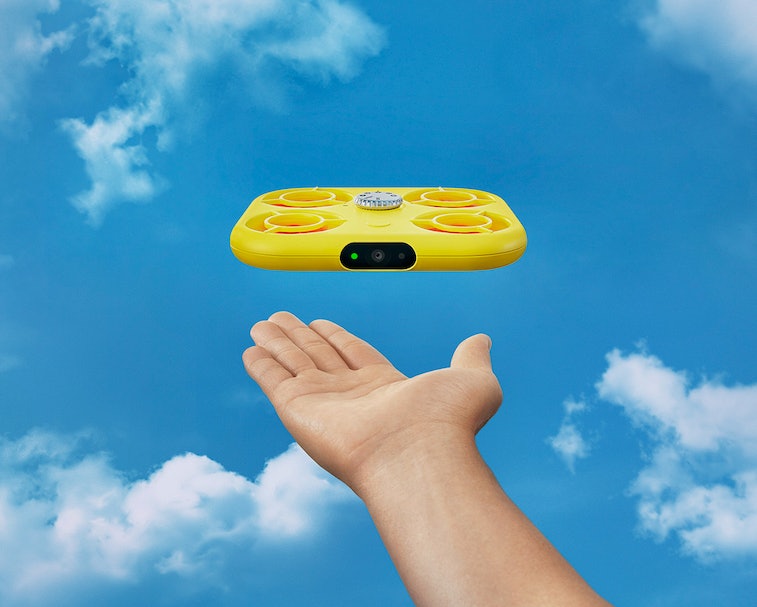 Snap is trying something new again. The company behind Snapchat revealed its Pixy drone — err, “flying camera” — marketing it as a way to get a fresh perspective for some creative shots.

But, the Pixy looks like a toy drone. It’s definitely not for serious aerial footage capture. We’re not trying to compare it to DJI’s Mavic 3 or even its more-affordable Mini SE, but the Pixy might fall short of many peoples’ expectations. The Pixy does seem fun and easy to use, though.

Early tests — Snap didn’t reveal many specs about the Pixy in its press release or its website, but there are enough reports and some early tests already out there. The one thing the Pixy has going for it is its small pocket-size shape. FCC documents that were first spotted by The Verge show that the mini drone is about 5.1 inches by 4.7 inches.

The Pixy has four preset flight paths, including float, orbit, follow, and reveal. It seems very straightforward to use as you just tap a button to activate whatever flight path you chose and once it’s done, it looks for your hand as a landing pad. Watch out for your surroundings though because the Pixy has no obstacle detection. Pixy is also directly linked to your Snapchat and can wirelessly transfer videos and save them as Snapchat memories, where you can then edit and prepare them to be uploaded.

The Verge already got their hands on the flying camera, so we have some idea of the Pixy’s performance. It can get around five to eight flights, which each take anywhere from 10 to 20 seconds, on a full charge. Considering that influencers will probably end up shooting more than eight takes to nail the perfect one, this seems like laughably poor battery performance. The Verge’s review also pointed out that the Pixy has a 12-megapixel sensor and 16GB of internal storage. Snap also told The Wall Street Journal that it doesn’t recommend flying it when the wind is anything above 7 mph, which is pretty much a light breeze.

Snapchat superusers — I can’t really see the Pixy appealing to anybody other than Snapchat superusers who want every angle at their disposal. At $230, Snap’s banking on Snapchat diehards to get it, much like its Specs. And, extra batteries, which you’ll most definitely need, are $20 a pop.

I commend Snap for trying something new once again because the Snap Spectacles were kind of cool, but the Pixy just feels like Snap might have dumbed the hardware down too much. But maybe it could be a blessing in disguise because otherwise we’d just have this, but with tiny drones everywhere.