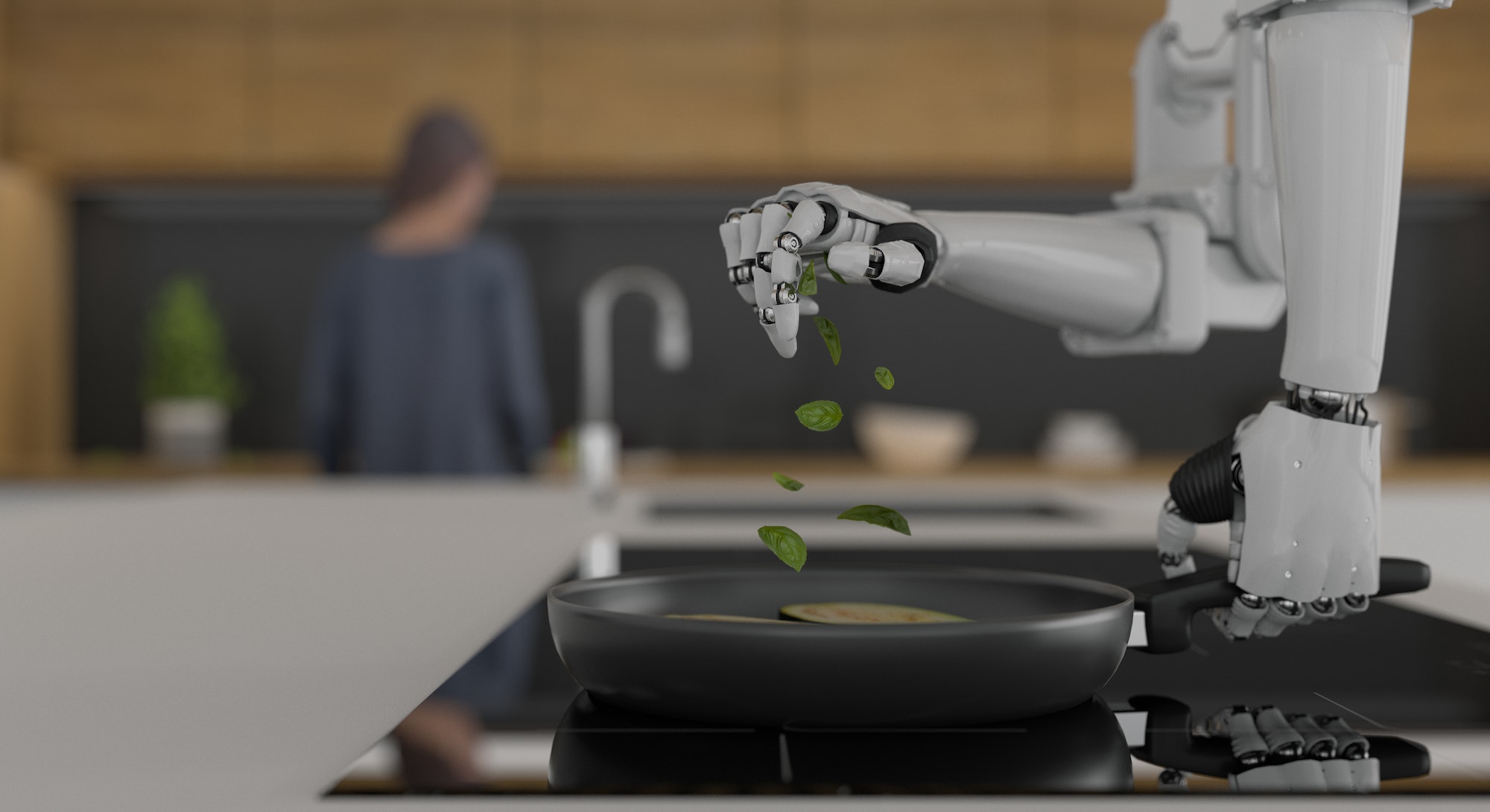 Smart home appliances are ubiquitous. At the moment, it’s somewhat understandable that they’re being predominantly used for security and ambiance (though there are disturbing privacy issues with that, too). But the smart home industry and its near-pathological obsession with smart-ing up virtually everything is gradually creeping into our kitchens.

You've probably heard about the microwave that you can talk to, the pan that self-regulates temperature, the fridge that can alert you if you’re low on groceries, the Alexa-enabled stove, and more. In fact, in an attempt to hype food tech up, there was a Smart Kitchen Summit last year.

The idea, it appears, is to make the kitchen sleek, modern, and creepily immaculate — despite the fact that the kitchen is intended for mess. There's a sink and cleaning supplies built into the concept of the room. By virtue of its main purpose — cooking and thus experimenting — the kitchen is meant for mistakes that can, and do, lead to wonderful, delicious discoveries. With some element of creativity, leftovers can be turned into full meals for the next day and proportions can be played around with, resulting in something you fall in love with based on pure guesswork. The kitchen is not supposed to be flaw-free.

Regardless of how advanced we’ve become as a species, the kitchen was, is, and will always be a delectably messy trial-and-error zone, whether people in the more affluent zip codes of San Francisco or Boston like it or not.

The kitchen is meant for mistakes

Companies that create these smart kitchen appliances seem to forget that the majority of their products end up becoming a distraction, not a convenience. Ask yourself honestly: What purpose does a WiFi-enabled and Alexa-connected Instant Pot priced at $139.99 serve? This upgrade to the standard pressure cooker provides little to no utility that you can't already derive from your smartphone. There’s also a Bluetooth-enabled smart blender that tracks your groceries, needlessly complicating the painfully basic process of writing a simple to-do list. There is no need to automate a rudimentary task like that. There's also a touchscreen toaster from Revolution, worth $299.95, that sounds like a tedious, overwrought device out of Black Mirror. In the even more useless category, there is the $60 Bluetooth-connected fork supposedly meant to encourage healthy eating habits. With a clunky design and a lukewarm philosophy, naturally, it failed.

This mess can be avoided. Smart kitchen fanatics should ask themselves a simple question: Can a smart kitchen appliance actually emulate the instincts of a human cook — or the rhythm and rhyme of cooking as a source of meditation, socializing with friends, family time, and pure self-indulgent sustenance? Not really.

I'm not the only one against smart kitchens. Joe Ray summed the issue up for Wired, calling the smart kitchen "very stupid." Ray is right. "The kitchen is a practical place to get work done,” he wrote. “Yet so much of the smart kitchen just feels pointless. Simple as it sounds, manufacturers seem to be forgetting that people in the kitchen are there to cook [...] Extra time fiddling around on my phone doesn't help make dinner. In fact, it makes it harder.” In Kitchn, Anne Wolfe Postic tore into Silicon Valley by pointing out that smart kitchens will never replace a smart cook. It’s true.

If you want perfectly prepared, ready-to-eat, tech-enabled food, I encourage you to purchase TV dinners. The culmination of food technology is a frozen food factory, and it has existed for nearly a century. Or order take-out. At least take-out is, at some point, touched by a chef.

If you don’t believe me, Ray, or Postic, run a poll among professional chefs and see if they’re keen on smart kitchens. From what current opinion shows us, most pros are ambivalent about these products. They heavily side with old-school methods rooted in personal estimations and traditions handed down from generation to generation. There’s an enduring beauty to that. What these chefs are not into is expensive gadgetry peddled by companies that couldn’t bake a single decent pie even if its entire staff, including its CEO, came together to do it.

Look, we don’t have to completely abolish advances in kitchen products. Some of them serve a good purpose and help people cook with more ease and less time — sous vide is all the rage! But if we are to have a smart kitchen, creators should stop asking themselves, How can we trick people into using this through aesthetics? Instead, they need to sincerely ask home chefs what their pain points in the kitchen are. Get opinions from working parents, professional chefs, and millennials who decimate full industries by their sheer apathy towards chores. Maybe if they consulted these demographics, they'd know that most people do not have the finances to buy these pointless gadgets. Most people are average cooks who don’t need to complicate kitchen affairs.

If companies like Anova, Picobrew Zymatic, Dacor (which made an "IQ Wall Oven," whatever that means), and their competitors, want to convince kitchen tech skeptics like myself, they need to ditch their ambitions to sell us a complete line of products before convincing us of the need for one of their products. No one truly needs a robot in their kitchen to make things “perfect” and “smart.” No one really wants to speak to a microwave if they can simply reach over and tap a few buttons to get the deed done. No one actually wants to teach their kids how to make bacon and eggs if the pan does half the job. These tasks will always require a necessary degree of human involvement and attention for them to be memorable and, most importantly, rewarding.

After all, imagine a life where the kitchen is always and forever a perfect place, where mistakes never happen and learning experiences are never had. No one makes unexpected discoveries and nothing ever burns, spills, or splashes. Imagine a kitchen where kids don't make a huge mess on Mother's Day.

What a dreadfully boring room that would that be.