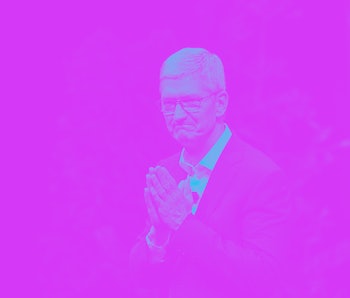 There’s a new profile out in The Wall Street Journal about Tony Blevins, the vice president of procurement at Apple — basically the guy who signs deals with every company that provides parts and services to Apple. The story sheds light on how the company has managed to maintain profit margins that significantly exceed those from competitors like Samsung.

Blevins met CEO Tim Cook at IBM in the 90s and joined Apple in 2000, with his first job sourcing small items like toilet paper. He's notorious for his frugality, apparently negotiating a $5 necklace down to $2 during a vacation in Hawaii. He has been a bit more ruthless with Apple's partners, however.

In one example of Blevins wielding the massive scale of the iPhone business to drive down costs, he threatened to find an alternative to partner STMicroelectronics NV's product in 2013 after the company refused to request lower prices for gyroscope sensors, according to a former STMicroelectronics executive.

The supplier held its ground, only to watch the business shift to a rival. That killed an estimated $150 million in the supplier’s annual revenue, according to data from IHS Markit, amounting to a fifth of its sensor sales.

In a more infamous case, Apple got tired of Qualcomm’s licensing racket and Blevins convinced its network of contract manufacturers to band against the chipmaker:

Twelve days later, manufacturers began withholding the licensing payments from Qualcomm, in an amount that eventually totaled $8 billion, the chipmaker said in court. The developments cost Qualcomm a quarter of its market value at one point and triggered layoffs.

Apple basically failed at getting a better deal for its smartphone modems from Qualcomm, which has a monopolistic hold on the technology, but ended up purchasing Intel's nascent modem business with the intent of eventually cutting them out for good.

The Journal also reports that Blevins periodically rotates his staff members through different supplier relationships so none of them get too comfortable with any particular company — which could lead them to cut a friendlier deal, or accept kickbacks in exchange for maintaining a deal.

It's not personal, it's just business — Tough cost cutting has become important to Apple as growth of the iPhone business slows and the company works on building up subscription services including Apple TV+ and Apple Music. According to the report, the iPhone business has an operating margin of 25 percent, much higher than what Samsung manages (9-14 percent according to one report).

By further cutting its costs and offering a wider range of iPhones at every price point, Apple can keep that business stable or growing as existing customers upgrade less often and established markets like the U.S. stop growing.

Apple also continues to work on the development of its own internal hardware as a way to eventually cut out middleman partners entirely, like in the Qualcomm case.