“We don’t foresee anything bad coming out of this.” 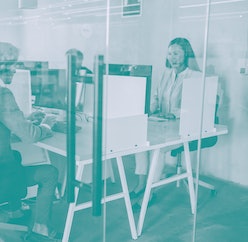 The premise of Sanas is pretty simple: remove your accent in real-time. It’s created with businesses like call centers in mind, where callers deal with racial biases based purely on their voice profiles. But Sanas doesn’t just want to make your voice more “neutral” — it wants to solve the overwhelmingly large problem of voice-based racial bias in the process.

Marty Sarim, president of Sanas, made it pretty clear where he believes his company stands to help the world in a recent talk with SFGate.

As is the case with most deepfake technology, Sanas’s lofty dream is greatly hampered by the harsh realities it hopes to change. Racial bias won’t be eradicated by making everyone sound the same; it is, in fact, antithetical to that progress. It’s just racial color blindness by a different name.

Accents don’t cause bias — Sanas uses algorithms to make voices sound whiter. The example on the company’s website removes a man’s noticeable Indian accent and turns it into something robotic and uncanny — and, yes, white.

Sarim says accents are a problem because “they cause bias.” Bias does not work this way, of course; it’s not the object of the bias that causes it to exist. Removing the object of that bias — an accent, in this case — doesn’t do anything to rid the world of that bias. It simply sweeps it aside in the name of peaceful conversation.

But you don’t even need to speak with Sarim directly to understand where Sanas’s mission veers off course. Here’s where it happens: right at the start. Sanas’s website says the software is “creating a more connected, friendly, and empathetic world by revolutionizing how we communicate.” Sanas is doing none of these things; it’s just masking your identity.

Pure capitalism — It’s that easy to parse out how, exactly, Sanas will fail to affect radical change. That’s because Sanas’s goal is actually just to make money. Plain and simple.

“We don’t foresee anything bad coming out of this,” Sarim told SFGate. “In fact, I’ll take the opposite approach and just say, this is a GDP-shifting product.”

Plenty of investors have signed on board to back Sanas, including, most recently, a $32 million Series A funding round in June. That’s a testament not to the product’s ability to fight bias but instead to how much revenue investors believe it can make. While there’s nothing illegal about using deepfake software, we do know people are pretty bad at recognizing deepfakes when they see (or hear) them — so it may be in our best interest to better regulate this technology before it really takes off.