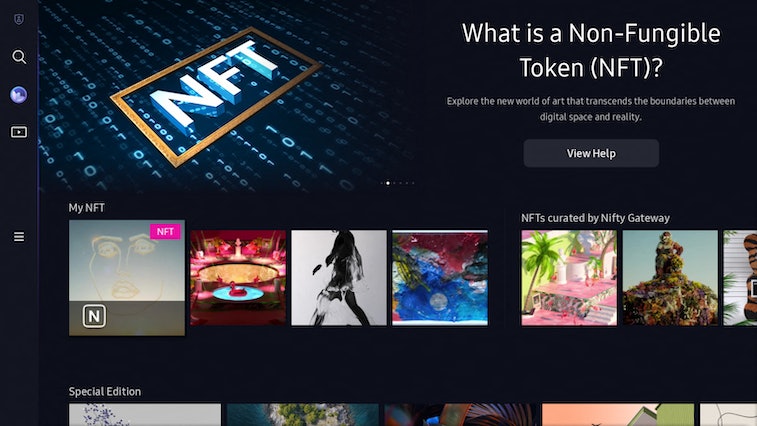 The NFT hype has finally found a new place to take up residence: your smart TV. Samsung’s forthcoming lineup of TVs will include a built-in NFT platform for browsing, trading, and buying digital art, the company revealed as part of its CES 2022 presentations.

“With demand for NFTs on the rise, the need for a solution to today’s fragmented viewing and purchasing landscape has never been greater,” Samsung says.

The new Samsung platform — which is apparently called the “NFT Aggregation Platform” — will reportedly allow users to preview on-blockchain art right from their TV, along with relevant information about the NFT’s metadata. That includes any previous purchase history, as well as information about its creators.

While buying and selling NFTs in an app or web browser is easy enough, putting your digital art collection on display is a much trickier affair. Samsung’s getting in on that burgeoning market early.

Digital art you can actually display — Platforms for trading NFTs are a dime a dozen, these days. Platforms that allow you to actually show off the art you spent thousands on — rather than just keeping it in the back corner of some app — are not as easy to come by. For the NFT-obsessed, the ability to display your art could be a make-it-or-break-it feature.

Samsung’s move into the NFT space is made even more savvy by the fact that, of all TV-makers, Samsung is the most invested in creating television sets that look like art. The Frame is the best example here (it’s literally made to look like a framed piece of art), but others like The Wall fulfill a similar purpose.

Samsung hasn’t released details about which of the near-endless supply of NFT platforms it will aggregate in its TV portal. The sole preview image hints at some curation by Nifty Gateway, though.

NFTs aren’t going anywhere — NFTs, once considered by most large businesses to be a niche trend for crypto bros, have gone full mainstream. We’re talking about a dedicated platform that will be baked into new Samsung TVs — that’s about as mainstream as it gets.

Unfortunately enough, this large-scale adoption means we’re seeing an influx of NFT cash-grabs, too. Now that NFTs have been proven themselves profitable, everyone from Ubisoft to RadioShack wants in on the action. The market’s popularity has also opened up plenty of opportunities for straight-up scams and projects rooted in blatant racism. Because of course it has.

More information on the NFT Aggregation Platform should be released in the next few weeks, Samsung says. It’s planned to ship with Samsung’s 2022 TV lineup, including the MICRO LED, Neo QLED, and The Frame; no word yet on whether or not it will be available on older models.