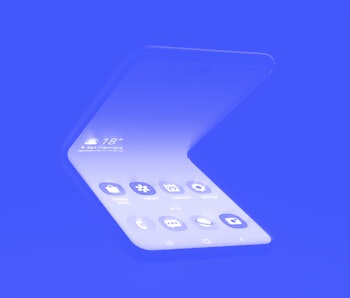 We’re only two weeks away from Samsung’s next Unpacked event, which means the leaks are pouring in. According to leaker Ishan Agarwal, Samsung’s Galaxy Z Flip clamshell foldable will include a 12-megapixel main camera, not the 108-megapixel version expected to show up in the Galaxy S20. That might seem disappointing at first blush, but if the rumored sub-$1,000 price point and high-capacity battery turn out to be true, Motorola’s Razr will be, to use a technical term, “screwed.”

Mostly flagship specs — According to Agarwal, the Z Flip will include a 6.7-inch AMOLED display and 256GB of storage. It’ll run Samsung’s One UI 2.1 (we’ve only seen version 2.0, but don’t expect there’ll be major updates), and have either a 3,300mAh or 3,500mAh battery.

A Motorola muncher — If true, that’s over 1,000mAh more juice than the delayed Motorola Razr that was meant to go on sale this month. But more importantly, if it comes it an under a grand, the Galaxy Z Flip will be a third cheaper than Motorola’s $1,500 foldable.

You’d have to be a huge Motorola fan to pay that sort of premium. Instead, you could spend that extra money on a pair of Samsung’s second-generation Galaxy Buds, pictures of which also leaked today. Also, Samsung’s reportedly introducing a flexible glass for the Z Flip’s display instead of the bendable plastic found on the first generation Fold and, you guessed it, on the new Razr.

Depending how long the Razr delay lasts, Samsung could have it clamshell on shelves and in pockets first. If that happens, Motorola better have a killer Razr 2 in the works.