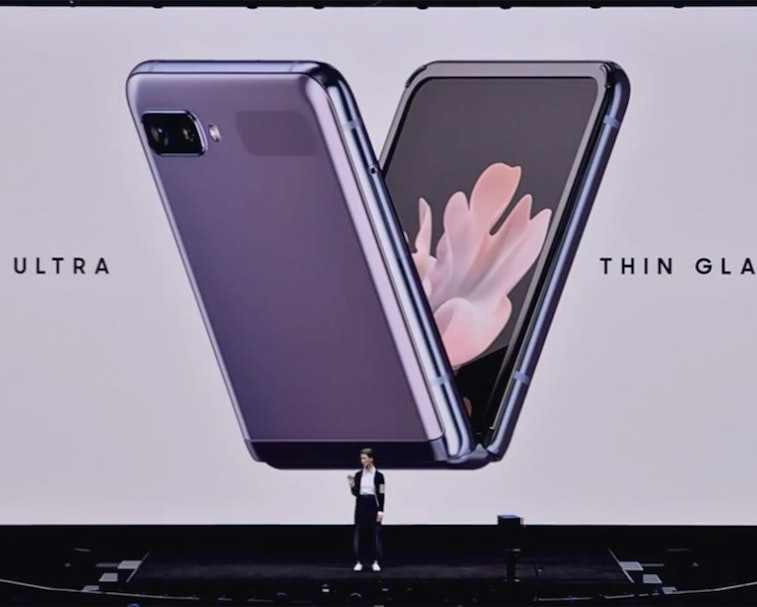 Samsung today announced the Galaxy Z Flip, its second try at making a foldable phone after the disastrous flop of its Galaxy Fold. The phone is slated to go on sale on February 14th for $1,400, and it appears supplies will be limited.

Who is going to sell it? — Both Sprint and AT&T have made announcements that they’ll be carrying the Z Flip at launch. The caveat seems to be that both will be offering the phone only at a limited selection of retail stores. Pre-orders are available online, however it’s not clear whether or not they will arrive on launch day.

T-Mobile confirmed in an email that it won't be selling the Z Flip. Verizon has not yet responded to a request for comment but I imagine it's the same there.

Sprint’s promotional site for the Z Flip includes a list of stores in 19 states; AT&T’s press release lists only five cities and reads, “At launch, supplies are limited.” Verizon is carrying Motorola’s new foldable Razr so perhaps that’s where they decided to focus their marketing attention for now. They might have made the wrong choice, however, as we found that the Razr kind of sucks.

Samsung might be onto something — The Z Flip is shaping up to be a phone with some genuine potential with early impressions finding that the phone is much better built than the Galaxy Fold. Crucially the phone ditches the plastic body of the Galaxy Fold for metal and an “ultra-thin” glass screen that should be much more durable. The hinge also features special fibers inside to help block out dust and debris.

Still, the Z Flip is a $1,400 experimental phone so it’s not super surprising that Samsung isn’t churning these things out in the same quantities as a more sure thing like the Galaxy S line. It's probably wise to get a feel for early reception first. All the major carriers, on the other hand, will be offering the S20.