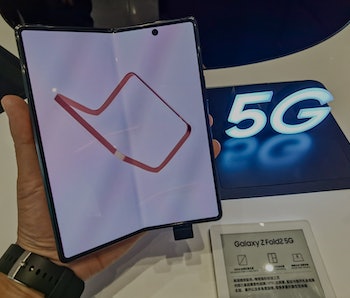 Samsung isn't leaving much mystery about its next moves, as its head of mobile has taken to its corporate blog to discuss the year ahead. In a post, TM Roh says 2021 will bring new foldables and features from the Galaxy Note will be introduced in other devices, which aligns with rumors that the product line is being killed off.

Roh specifically says that the company will be expanding its portfolio of foldables, "so this groundbreaking category is more accessible to everyone."

Cheaper foldables — Samsung's foray into foldables was messy when it introduced the defect-riddled Galaxy Fold in 2019. The company took some time to work out the kinks in its folding glass screens, and the more recent Galaxy Z Flip and Galaxy Z Fold 2 have been much better received. In our review of the latter, we said that Samsung finally made foldables a legitimate option, but the $2,000 price tag nonetheless made it out of reach for most.

Especially as a pandemic and economic recession continues, the pricing feels a bit tone-deaf. It's at least not as bad as Apple dropping a pair of headphones for $550, however. In any case, lower prices will be welcome.

Besides new foldables, Roh said that Samsung has been paying attention to people's favorite aspects of the Galaxy Note experience and will, "add some of its well-loved features to other devices." As all smartphones have gotten larger in size, the Note has lost its biggest differentiating factor. With Samsung now turning its eyes to foldables as the next big innovation, it's expected to bring the Note's S Pen stylus support to other phones, rendering the line all but obsolete.

Camera improvements — Roh also said that camera improvements will be major in 2021, with the introduction of "super-intelligent, pro-grade camera and video capabilities." Qualcomm's new Snapdragon 888 chip is expected to bring welcome enhancements to Android cameras, including the ability to shoot up to 35 times faster, and from three cameras simultaneously. Samsung has been criticized for the image processing in its Galaxy S20 Ultra and Note 20 Ultra, however, and that comes down not to hardware limitations but rather its subjective opinion about how pictures should look.

More concrete announcements are supposed to come in January, when the Galaxy S21, the successor to the flagship Galaxy S20, is rumored to be unveiled.