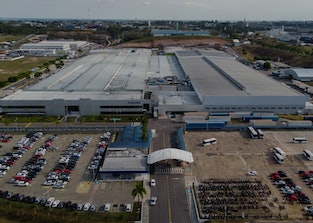 How much Samsung is rumored to be sinking into its Texan chip manufacturing plant.

Samsung is expected to award its new, $17 billion chip manufacturing plant contract to Taylor, Texas, as soon as later today, per a report from The Wall Street Journal. The decision comes as both the Biden administration and Congress have tried to put the gas on increasing stateside production of semiconductor chips after months of intensive supply chain woes.

If true, the new, massive complex could add as many as 1,800 jobs to Taylor and its surrounding areas — seeing as how the Austin-adjacent small-town’s population hovers at around 16,000, this would certainly be quite the economic boon to the region.

The impending announcement is welcome news for American manufacturing. Since 1990, the U.S. portion of global semiconductor chip production has fallen from 37 percent to about 12 percent as of last year. Samsung’s pick of Texas also continues the state’s winning streak when it comes to wooing tech industry heavy-hitters — last month, Elon Musk announced he would be moving Tesla’s headquarters from California to Texas, thanks to the state’s income tax rate of, well, zero.

Money unsurprisingly beats ethics — As great as it is to see new American manufacturing jobs in the pipeline, it’s definitely marred by the fact that this is Texas we are talking about, after all... you know, the state counting Greg Abbott as governor. The one hellbent on restricting women’s bodily rights to be about on par with Gideon from The Handmaid’s Tale.

Instead of companies boycotting the state in an effort to pressure its government to ease off on the theocratic, MAGA-poisoned lunacy, tech companies are willing to overlook human rights abuses to make the most profit possible. But then, that’s the American way.