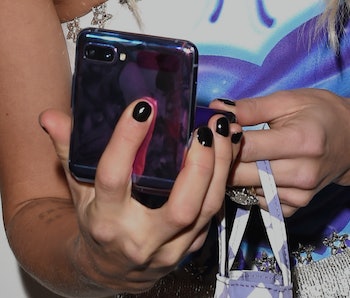 Samsung has announced that it will be restocking the Galaxy Z Flip on its U.S. website this Friday, February 21. The foldable phone went on sale last week but apparently sold out both online and in retail stores within minutes due to very limited stock.

“Friday, February 21st will be a big day for Galaxy Fans,” Samsung said in a press release. “That’s when we will open the Galaxy S20 preorder... It’s also when we will be making additional Galaxy Z Flip devices available online.”

Samsung probably didn't make many to begin with — While we don’t know exactly how many Z Flips were made for its initial release, early reports indicated that Samsung had only 900 units in stock for its South Korean launch — a pitiful number for a much-hyped release. That could be a result of supply chain delays due to the coronavirus outbreak (though Samsung doesn't produce phones in China), or perhaps Samsung is being cautious considering the Z Flip is an unproven phone that costs $1,500.

The Z Flip is Samsung’s second attempt at creating a foldable smartphone after the disastrous launch of the Galaxy Fold, which was incredibly fragile for a $2,000 phone. The Z Flip is supposed to improve on the Fold’s poor reliability by replacing the plastic screen with an “Ultra Thin Glass” one, and adding fibers inside the hinge to prevent debris from entering and breaking the screen.

And I oop — Unfortunately, early reports are not great, suggesting durability of the screen is still an issue. Samsung has responded to concerns by saying that the display on the Z Flip is covered in a protective layer, which is why scratching is still easy. Even still, one Twitter user shared an image of his brand new cracked Z Flip, which he thinks might be the result of cold weather.

Once more devices hit customers' hands we should get a better understanding of how durable the Z Flip is. Consumers should expect more from a $1,500 phone though — our existing smartphones cost less and don't have these slew of issues. A more compact device isn't worth that price if it breaks so easily.

If you still want to get your hands on a Z Flip, though, keep your eyes peeled on Samsung.com come tomorrow.