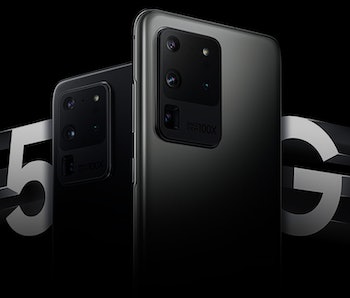 Samsung held its annual Unpacked event today in San Francisco, and besides unveiling the Galaxy S20 and Z Flip, a big theme of the event was entertainment. The company announced a slew of partnerships and integrations for its new phones with brands including YouTube, Spotify, and Netflix.

The partnerships are meant to demonstrate the power of the new phones, with an emphasis placed on the giant new camera sensors and 5G radios that are now present in every Galaxy device.

Video — The new Galaxy S20 features a 64-megapixel camera — or a staggering 108 megapixels on the S20 Ultra, which Samsung says is the, “largest, most powerful image sensor we’ve ever put in a smartphone.”

Drew Blackard, the company’s head of U.S. product management, said Samsung has created an entire ecosystem around the S20 cameras. As an example, he offered that S20 users will be able to record 8K video on their device, upload directly to YouTube (over 5G, of course) without any degradation, and then play the video back on an 8K Samsung OLED TV. While 8K TVs aren’t very commonplace yet and you probably shouldn’t get one right now, the point is all the pieces are in place to take advantage.

Samsung has also partnered with Google to integrate its Duo video chat app directly into the phone app so users can easily start video chats that are, “crisp and clear over 5G" (5G was mentioned in pretty much every sentence). There’s a new video voicemail function so if your friend doesn’t answer you can still leave a message.

Directors of Netflix originals will use S20s to create bonus content for Galaxy owners, and Bixby is gaining an integration so that users can ask the assistant to play a film or TV show and it will open Netflix, if the content is available there. Samsung Daily will feature Netflix recommendations based on what you’ve already watched.

Samsung mentioned how Netflix offline downloads will be "ultra-fast" over 5G so you can quickly queue what you want before a flight, for instance.

Music — Alongside the phones Samsung unveiled the Galaxy Buds+, which are identical to the original Galaxy Buds with some improvements to battery life and the microphones. There’s still no active noise canceling, however.

The company says that the Galaxy Buds+ gain an integration with Spotify that will allow users to launch Spotify with a single press of the play button on the touchpad. With Bixby Routines, users will get custom soundtracks personalized around their daily routines.

Gaming — The S20 features 12GB of RAM and a display with a zippy 120hz refresh rate, and Samsung partnered with Microsoft to take advantage of that. The two company’s announced that Forza Street will be coming to the Galaxy Store, the first time the brand has come to mobile. Samsung says that its AKG division tuned audio playback on the S20 for peak performance and a “powerful gaming experience.”

Overall, the partnerships seem like a smart way for Samsung to demonstrate the value of its new technology in practice rather than throwing it in there just because it can.