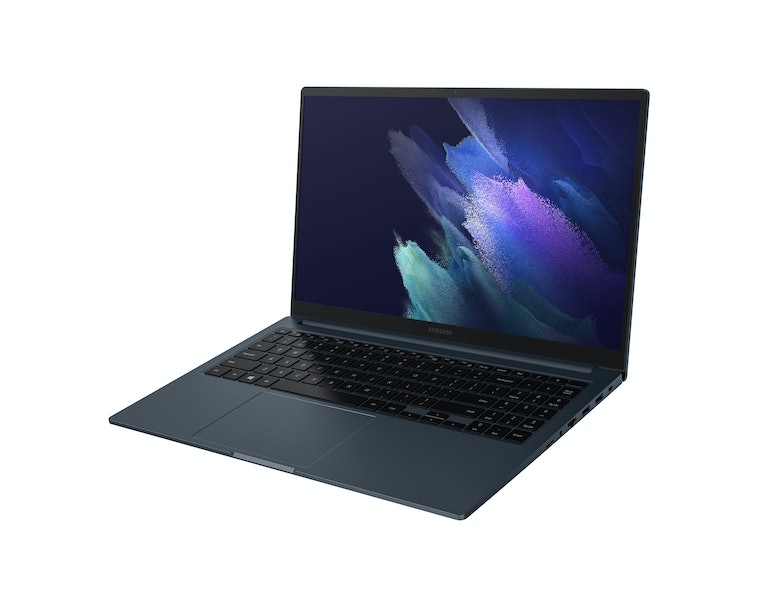 If you’re still getting over last week’s dull Samsung Galaxy Unpacked Part 2 event, here’s something that may help. Samsung has announced three new laptops, ranging from a modest productivity machine to a gaming laptop with top-tier specs like Nvidia RTX graphics. All three laptops will be available in the coming weeks, with the most affordable model, the Galaxy Book, available from the Samsung store starting today.

Galaxy Book Odyssey — This Samsung laptop is for power users. It’s rocking an H-series 11th-gen Intel CPU. Intel’s H-series processors are optimized for mobile (laptop) devices and, according to Intel, “bring powerful performance to your laptop for desktop-caliber gameplay, creation, and mobile workstation productivity.” On the GPU side, the Galaxy Book Odyssey has an Nvidia RTX 3050 Ti — it’s no 3070 or 3080, but you should be able to play games at 1080p/60 fps just fine.

The Odyssey comes in the Mystic Black colorway. Samsung
Top-side view of the Odyssey, which has an interesting look. Samsung
Ports! Samsung
And more ports! Samsung
The bezel on this 15.6-inch FHD display is thin. Samsung

The Galaxy Book Odyssey also features a large FHD 15.6-inch display with thin bezels and a wide 170-degree viewing angle; Samsung says the screen has an average brightness of 300 nits and comes with an anti-glare coating,

In terms of ports, there’s a microSD card slot, a headphone jack, an Ethernet port, three USB 3.0 ports, two USB-C ports, and an HDMI port. Long story short: you can leave any hubs or dongles at home if you’re taking the Odyssey on the road.

At 15 inches, the Galaxy Book Odyssey is a beefy, metal-clad computer. Ironically, the laptop with a moniker for traveling is the least suited to do so. However, the next one is a better travel companion.

Galaxy Book Pro 360 5G — With Apple’s new MacBook Pro stepping on the competition, the Samsung announcement is well-timed. Though only six months from releasing the “most powerful Galaxy devices” ever in April, the Galaxy Book Pro and Book Pro 360, it seems the latter is getting a proverbial shot in the arm.

The Galaxy Book Pro 360 5G’s name tells you what’s new: 5G. Unlike other high-performance laptops, this one is thin and light — the 13.3-inch laptop weighs just under 2.5 pounds, which is a tad more than the previous model’s 1.91 pounds, though it’s still very thin.

The Windows 11 laptop sports an 11th-gen Intel CPU. The laptop is Evo-certified by Intel, meaning the laptop is rated for higher performance across battery life, connectivity, graphical performance, and overall speed.

The 2-in-1 comes with an AMOLED display, which means true blacks, and an included S Pen for writing or drawing.

Galaxy Book — Finally, the Galaxy Book is a 15.6-inch lightweight laptop with an Intel Core i5 or i7 processor and Intel Iris Xe MAX graphics. There are two configurations: 8GB of RAM + 256GB SSD and 16GB RAM + 512GB SSD. The Galaxy Book comes with a full HD resolution touchscreen and Dolby Atmos-ready speakers. For ports, the laptop has two USB-C ports, two USB 3.2 ports, a microSD card slot, and HDMI.

While it may not be the most powerful of the three, the Galaxy Book’s $750 starting price is sure to catch the eyes of the budget-conscious.