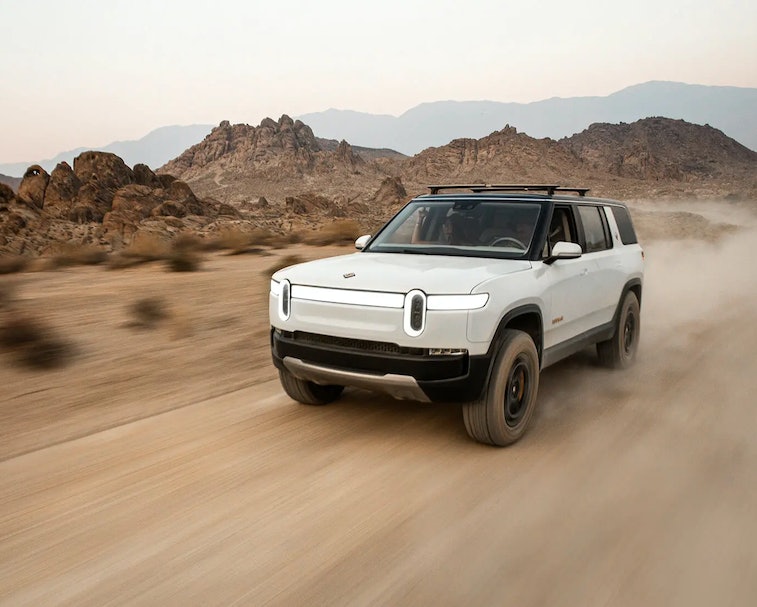 Michigan-based EV startup Rivian has unveiled the production version of its R1S electric SUV, and it looks pretty great. The R1S will have a price tag starting at $70,000 and climbing to $77,500 with offroad-focused upgrades and other optional extras. The automaker says that deliveries of the R1S will begin in August 2021, which means given Tesla's propensity for missing deadlines, it could beat the Cybertruck to market.

Rivian is marketing the R1S to adventure-focused types, but the vehicle fits right in with other cars in the luxury SUV segment like the Cadillac Escalade and Lincoln Navigator. The R1S is much more powerful, however, thanks to its electric drivetrain that Rivian says can take the car from 0-60 mph in just three seconds, half the time of those competitors.

An offroad dream — Considering that the price is comparable to those gas-guzzling luxury SUVs, it seems likely that the offroading Range Rover demographic will love this vehicle, too. It might even be more interesting than its closest competitors. Because despite being larger than Tesla's Model Y, the high-end performance version of that car is slower, going from 0-60 mph in 3.5 seconds. The R1S has a lower 300-mile range when compared to the Model Y's 325 miles in its long-range configuration. But then, the Model Y also lacks the ground clearance to make it a serious rival for those who expect to do more with their vehicle than climb the odd curb.

The R1S is big enough for a third row and is going to be offered in 5-seater and 7-seater configurations, and will have a towing capacity up to 7,700 lbs. The $77,500 model includes off-road upgrades including a reinforced underbody shield and dual front bumper tow hooks.

Rivian says that the vehicle will be equipped with its Driver+ hands-free driving system. The R1S is supposed to continually receive new functionality through over-the-air updates, much like a Tesla does. But one thing it won't have is access to Tesla's large Supercharger network, though other public networks of chargers exist across the U.S., like ChargePoint and Electrify America.

We haven't actually seen Rivian ship any vehicles yet (though Input news editor, Craig Wilson, saw one at the L.A. Motorshow in 2018 and got reprimanded for trying to get into one), but it's raised an enormous amount of cash, nearly $6 billion from investors including Amazon and BlackRock. The former recently unveiled an electric delivery truck built by Rivian that it expects to put into use by 2022. Rivian has also been focused on developing its R1T pickup truck that's slated to ship in June 2021.

Racing for the truck market — The R1T will have to compete against a slew of automakers racing to be the first to release an electric pickup truck. Ford says it will be delivering an electric version of its F-150 by mid-2022, and GM is planning an electric pickup with 400 miles of range and has the electric Hummer coming soon. And there's Nikola with its Badger but that company has been roiled by scandal and has stopped mentioning the Badger at all as it tries to salvage a deal with GM to make the Nikola One semi-truck. The market for electric SUVs is in comparison much more fertile ground.

Trucks and SUVs are the most popular vehicles in the United States, so automakers will need to make electric variants of those sized cars to really have a chance of converting customers. Taking the $7,500 tax credit into account brings the price of the high-end R1S down to $70,000, making it a very attractive vehicle if Rivian can ship it.