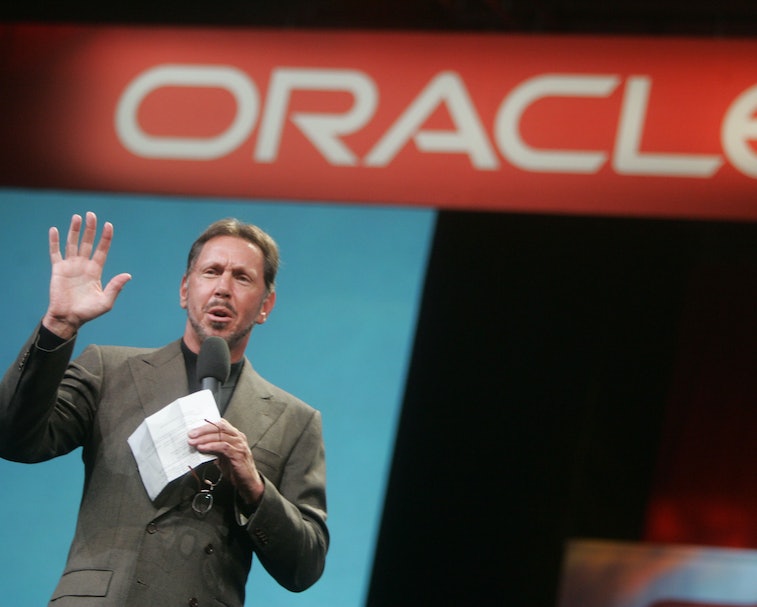 Oracle, the second-largest software company in the world, is now competing with Microsoft over a proposed buyout of TikTok, according to sources familiar with the matter.

The Financial Times reports that Oracle has already held preliminary talks with ByteDance, TikTok’s Chinese owner, about purchasing the app’s operations in the U.S., Canada, Australia, and New Zealand. President Trump has, in a bout of unprecedented over-reaching, threatened to ban TikTok from the U.S. entirely unless its operations are severed from ByteDance by November 12 (the original deadline was mid-September, but it's since been extended from 45 days to 90) and assumed by a U.S. based company.

For the last few weeks, Microsoft has been the favorite to take over TikTok’s operations, with the company going so far as posting a statement about its continued discussions with ByteDance, and some employees railing against the proposed acquisition. Now it’s sounding a lot like the deal will be less clean-cut and could even include a bidding war — especially as Oracle happens to have been co-founded by a vocal Trump supporter, Larry Ellison.

Full speed ahead — Oracle’s discussions with ByteDance are only preliminary, but the company is already making moves to prepare for a potential buyout. That’s included meeting with a group of U.S. investors that already own a stake in ByteDance, according to FT’s sources, including General Atlantic and Sequoia Capital.

Though its name may not be as well-known as Microsoft’s, Oracle is nearly as powerful, with almost $40 billion in sales last year alone. Oracle sells a variety of business software and owns the Java programming language.

Trump may play favorites — Those familiar with the potential deal did not provide any information on whether or not the Trump administration has shown any interest in the idea of Oracle buying TikTok. But given Ellison is one of the few tech leaders who openly supports the President, and considering Trump's enthusiasm for nepotism, we wouldn't be surprised if he did come out in support of Oracle's bid.

Ellison, an early Silicon Valley investor who’s now considered by Forbes to be the sixth-wealthiest person in the world with a fortune of about $69.1 billion, is the chief technology officer and executive chairman of Oracle and an avid Trump fan. He held a dedicated Trump fundraiser near Palm Springs this past February — the kind of fundraiser where tickets start at $100,000 and top out at $250,000. It’s difficult to imagine a situation where Trump would be unhappy about TikTok’s ownership passing to one of his buddies.

What about Tencent? — In discussing President Trump’s attempted ban on Chinese-made apps, there’s one piece of the puzzle that often falls by the wayside: Tencent, the other company listed explicitly in Trump’s August 8 executive order.

While TikTok’s future has been the subject of much debate in the media, Tencent’s has been left in the shadows. Tencent’s holdings range far and wide — the conglomerate owns WeChat, a "super app" that includes messaging, payments, gaming, food delivery, and has more than 1.2 billion monthly active users. It also has stakes in a huge array of companies, including the currently embattled Epic Games.

No buyers have shown public interest in purchasing Tencent’s U.S. operations, and it's unclear whether the company would even be interested in selling if there were. If Trump manages to ban U.S. entities from doing business with Tencent, it could also be disastrous for giants like Apple: a recent survey of 1.2 million WeChat users showed that 95 percent of respondents would rather stop using their iPhones than stop using WeChat.

Oracle’s interest in purchasing TikTok is still very much under wraps. And Tencent’s future in the U.S. is even more uncertain. Given the short window Trump’s given these companies to separate themselves from China, it won’t be long until we have a better idea of where they’re going next, though.