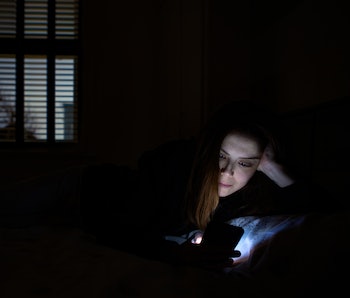 It’s now common knowledge that Night Mode is great for limiting your blue light intake and helping you sleep better at night — but a new study says that might not be true after all. According to the study, which was published in Current Biology, blue light doesn’t actually disrupt sleep in the first place.

So it’s all a fallacy? — That’s what Dr. Tim Brown’s research concludes. Brown’s study was carried out on mice, and it determined that brightness levels are actually more important than light color.

The blue light idea is based in science, too, though — Brown says the misconception begins with melanopsin, a light-sensitive protein in the eye. Melanopsin is better at detecting short-wavelength photons, like that in blue light. But the system is actually more complex than that — so limiting blue light doesn’t actually help.

While this conclusion has only been supported in trials on mice so far, Brown says there’s “good reason to believe it’s also true in humans.”

Whether or not this proves to be true for humans, Brown’s research is a reminder that we still don’t know everything about how technology usage affects our bodies.