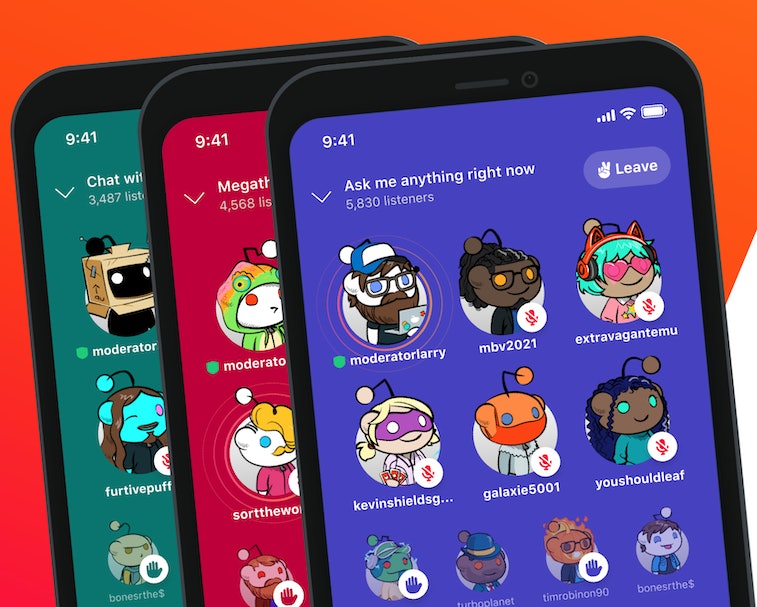 Audio chatroom app Clubhouse has yet another deep-pocketed competitor. Reddit has unveiled Reddit Talk, a social audio product that looks nearly identical to Clubhouse and that will live inside subreddits on the site. Right now, the feature is in beta and only moderators of subreddits are able to request access.

Audio hype — Clubhouse, which launched at the start of the pandemic, has exploded to more than 10 million users and just closed a new round of funding at a $4 billion valuation following acquisition interest from Twitter. The app has hosted discussions featuring major names from Elon Musk to Drake, and has been described as something like a quasi-bar where people can casually chat with strangers.

Reddit raised $250 million in February, and has more than 52 million daily users who are trained to go to the site to discuss everything from relationship problems to mods for Cyberpunk 2077.

Like Twitter Spaces and Facebook’s Hotline, the Reddit Talk product allows a host to initiate an audio chatroom and then invite, mute, and remove speakers. It’s a pretty shameless copy of Clubhouse, to be honest. Anyone on iOS and Android can listen to Talks starting today, if a subreddit they follow has started using them.

Synergy — Unlike other copycats, Reddit introducing audio chatrooms makes some sense. Where Clubhouse has had issues with moderation, Reddit relies heavily on community moderators to set their own principles for each individual subreddit. And subreddits are frequently home to AMAs, or “ask me anything” discussion threads in which experts spend a few hours answering questions from community members. One possible issue is that Reddit is anonymous by nature, and some users may be hesitant to reveal more of their identities.

Audio chatrooms provide a level of intimacy and nuance that text-based social media does not, but it’s yet to be seen whether they will remain popular after the pandemic subsides and people can return to cafes and bars again. Clubhouse conversations are hosted live, and once nightlife is back people will have less time to tune in. Conversions could theoretically be recorded but that would make them, in effect, just podcasts.

Slack, Discord, and Spotify are among the other companies that have also announced the addition of social audio products to their services. That doesn’t necessarily mean Clubhouse is doomed — Snapchat survived the cloning of its Stories format. But competition for Clubhouse is coming in quickly from all sides, much of it from far more established platforms that already have enormous, loyal user bases they hope to engage in long listening sessions.