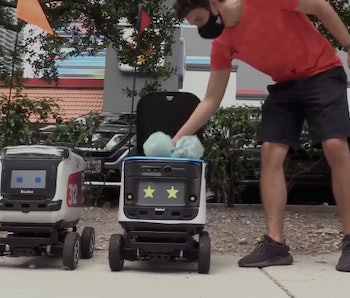 The startup Kiwibot has deployed a small fleet of semi-autonomous robots to deliver food and other goods in South Florida.

No tipping required — The robots were first deployed in 2019 at the University of California, Berkeley, where Kiwibot says that in the first six months more than 70,000 deliveries were completed.

Kiwibot is one of several companies that has been developing these types of four-wheeled delivery robots to supplement human couriers. Among others, Postmates has been testing a robot in Los Angeles and San Francisco since 2019, and around the same time Starship Technologies deployed a fleet to deliver food to students at George Mason University in Virginia. That company now operates its robots in cities around the world including Milton Keys in the United Kingdom.

Kiwibot normally charges a delivery fee of $3, not nothing, but less than one would pay a human driver since you won’t be tipping a robot.

Limitations — Like the others, Kiwibot’s robots are semi-autonomous — using GPS and a series of cameras on the front and rear, the robot can drive itself in the correct direction. But because self-driving technology isn’t perfect, remote supervisors are always watching the video feed from a distance to monitor and course correct if things go awry. The robots are also pretty slow, so Kiwibot says they’ll only support deliveries up to a mile and a half away, so that the robot can arrive in 30 minutes or less.

Because of those limitations, don’t expect Kiwibot to eliminate human drivers anytime soon. On the one hand that’s good — since there’s no safety net in the United States, many people have to rely on delivery service jobs to get by. If only those companies would improve conditions for the human workers.

Kiwibot’s robots are currently operating in Broward County, but officials in Miami are hoping to begin offering the robots there too within the next few weeks. The plan is to study how residents interact with the robots.