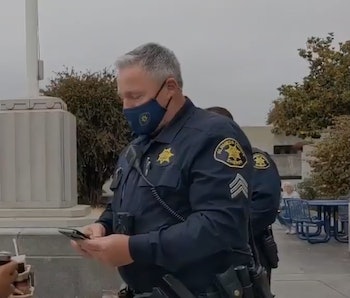 A police officer in Oakland, California was recently seen attempting to stop protestors from filming him for YouTube by playing Taylor Swift’s music through his phone. The aim is to trigger copyright filters on social media sites that would stop the footage from being shared.

The incident occurred at a pre-trial hearing for police officer Jason Fletcher, who last year was charged with manslaughter in the shooting and killing of Steven Taylor, a Black man, inside a Walmart. Taylor’s family alongside advocates from the Anti Police Terror-Project (APTP) gathered at the courthouse to listen to a hearing of the broadcast and show solidarity.

You tried — In a video shared on Twitter by APTP, a white sheriff’s deputy can be seen telling gathered individuals to move a #Justice4StevenTaylor banner that they were displaying on the courthouse steps. After a couple of moments of back-and-forth about whether it’s okay to display the banner, the officer slowly pulls out his phone and blithely starts playing some Taylor Swift music as they continue to talk.

“You can record all you want, I just know it can’t be posted to YouTube.”

“I don’t know why we’re — are we having a dance party right now?,” one of the protestors asks. “No, sir,” the deputy responds. “Are you playing pop music to drown out the conversation?,” another protestor presses, incredulous.

The deputy does nothing to hide his intentions, responding, “You can record all you want, I just know it can’t be posted to YouTube.”

Shared tactics — What the deputy is referring to is YouTube’s Content ID system, a blunt tool which automatically identifies videos that contain copyrighted content and grants its holders the choice to either have the videos taken down or monetized with their own advertisements. Blaring popular music, the officer was essentially trying to ensure there would be no visibility into his conduct.

The encounter is odd, but one we’ve seen before.

A similar incident was reported in February when a California police officer begun playing music after Los Angeles activist Sennett Devermont started streaming their interaction. Devermont was visiting the Beverly Hills Police Department (BHPD) to file a Freedom of Information Act request and wanted to know if he needed a new form for each event with the same officer. But the officer he met with at the station was bearing a “Blue Lives Matter” face mask, and Devermont began to challenge that on video, which is when the officer began playing music.

In that case, the BHDP said playing music during interactions was not an accepted procedure and that it was reviewing the incident.

Dumb cops — Unfortunately for the Oakland deputy, the video of his interaction is still being shared online, and probably more so specifically because of his attempts to suppress it. Also as mentioned, YouTube doesn’t necessarily remove videos flagged for copyright infringement, but will instead leave a video up and allow the original copyright holder to earn all the advertising revenue generated against it. Activists probably don’t care a whole lot about that.

Other platforms like Instagram tend to be more aggressive about policing copyright. On Twitter, users have responded to the incident by sharing ways to modify the audio of such videos so that they aren’t removed from other platforms.

Regardless, it’s disturbing that cops are evidently sharing these tactics and prepare to use them in advance of interactions with the public. It signals that they really don’t like the idea of being held to a higher standard as they rightfully should be, considering the power police hold over individual citizens and the culture that exists within policing to protect their own when things go wrong.