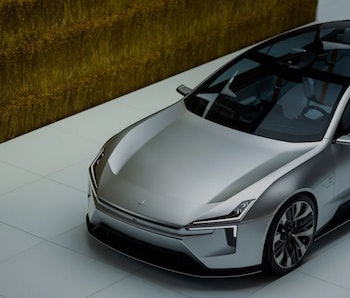 Polestar has announced plans to bring its Precept concept electric car into production. The Volvo sub-brand didn't say exactly when the car will be available, but did confirm it will be the automaker's third vehicle after the existing Polestar 1 and Polestar 2.

The car was initially unveiled as a concept meant to demonstrate the "brand's future vision" for vehicle design and materials. The Precept definitely has a gorgeous design, with a look that's modern but still has character and shouldn't be controversial.

This is not mass market — The Precept will probably be out of the price range of most people looking for an electric car — the Polestar 2 has a starting price of $59,000 but also a more practical design than the Precept with its suicide doors and LIDAR sensor for future self-driving capabilities. That should tell you it will be aimed at the premium end of the electric market. The Precept looks like it will compete more with the Porsche Taycan or Tesla Model S Plaid.

There are some quite nice design touches in the car, like a small driver's display mounted to the steering column. That keeps the dashboard clean while still providing useful information. And there's a "precise, diamond cut crystal" that houses a holographic projection of the Polestar emblem. There's also supposed to be an aerodynamic tapering of the cabin to help with battery efficiency.

The Precept is a sedan, not an SUV, so if you don't want a hulking vehicle and are okay bending down it might be a good choice. Unfortunately, sedans are increasingly rare in the U.S. and brands have been responding in kind with larger vehicles like the Tesla Model Y crossover SUV and Ford's electric F-150 pickup.

Chasing Tesla — Polestar isn't saying much about range or performance, but the Polestar 2 gets about 275 miles in range. The company began deliveries of that vehicle back in July, and Car and Driver gave it a good review in which it said the twin motors provide the car with good speed and responsiveness, if not as much range as a Tesla Model 3.

Volvo seems to be the only legacy automaker that's really making strong electric cars and doesn't feel like it's simply being forced into it for environmental reasons. The company is owned by a larger Chinese automaker, though, and that country has pushed much harder for the transition to electric. It even gave Tesla the first license to produce electric cars in the country without needing a joint venture with a local company.

Another legacy automaker, General Motors, has found itself in a bit of a PR snafu over its investment in hydrogen-electric carmaker Nikola. Meanwhile, Ford, BMW, and others have committed to producing electric cars for the U.S. market but are still estimating delivery times of late 2021 at the soonest. No automaker has quite been able to generate the excitement that Tesla has.

Like Polestar's other vehicles, the Precept will be manufactured in China but distributed globally.