Phil Schiller looks back on the birth of the iPad: “One of those ‘holy crap’ moments.”

“Well, if we’re going to get to a price point like that, we need to remove things aggressively.” 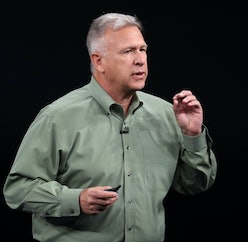 Apple chief marketing officer Phil Schiller talked about the development of the original iPad in a new interview with The New York Times. The comments were included in a broader retrospective on technology of the past decade. Schiller’s comments touched on the origins of the iPad, including the aggressive pricing strategy and how its development intersected with the iPhone.

The goal: make a computer under $500 — Schiller told the Times that the impetus for creating the iPad was then CEO Steve Jobs’ desire to sell a computer priced under $500. In order to make a quality computer at that price, Apple decided it needed to remove the keyboard and clamshell concept, moving away from a traditional laptop — hence multitouch was born:

“Well, if we’re going to get to a price point like that, we need to remove things aggressively,” Schiller said. “And so the team started working on multitouch technology. During that process, a human interface designer, Bas Ording, showed us this demo where he pretended to scroll and the whole screen moved up and down with realistic physics. It was one of those ‘holy crap’ moments.”

If you’ll remember, the iPad was unveiled around the time when everyone believed cheap netbooks would be the future of mass computing when in fact they were just poorly made, slow laptops. Google has managed to revive the idea with its Chrome OS designed for low-powered machines — something Schiller has some thoughts on.

Starting small helped — Schiller also said that Apple set aside the iPad in order to first release the iPhone, and that doing so made development easier when they returned to it later:

“When we got back to the ‌iPad‌, it was really easy to imagine what to take from ‌iPhone‌ and what needed to be different to create the product it would be,” Schiller said. “It really helped.”

Jobs gave an early demo of the iPad to Walt Mossberg, a columnist at the Wall Street Journal, and was careful to demonstrate that it “wasn’t just a big iPhone.” Mossberg was reportedly shocked by its thinness but also its low price, initially guessing it’d be priced at $999 instead of the original $499. Today the iPad line includes models at every price point, including the Pro line Apple markets as enabling serious work productivity.