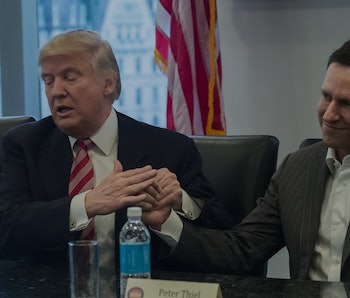 The Trump administration’s COVID-19 tracking tool is being made with assistance from Palantir, the data-mining firm co-founded by Peter Thiel, according to a new report from The Daily Beast. Thiel’s company has been tapped as a primary contributor to the tracking program, which is set to be called “HHS Protect Now.”

The precise extent of Palantir’s involvement in the project is yet unknown, though The Daily Beast has confirmed that the firm will provide “a major aspect” of the analytics platform, particularly with assistance from its Foundry platform. The information provided by the tracker is meant to be pulled by government officials and the president himself.

Thiel has long been an ally of President Trump, so it isn’t surprising that his firm has been brought on board for the coronavirus tracker. Palantir’s involvement in the project solidifies the tracker as a product of Trump's closest allies — which, given the administration’s track record thus far, could mean we won’t see results until it’s too late for them to help.

Remind me who Thiel is again? — Peter Thiel is a Silicon Valley executive best-known for co-founding PayPal and his subsequent ventures into artificial intelligence and surveillance research. In 2020, he’s also known as a top donor for Trump’s re-election campaign and the leader of Palantir, the intersection of which has led him to the coronavirus tracker program.

Palantir is all about leveraging technological advances to further surveillance across the country. Software produced by Palantir is used by the U.S. Army to collect and disseminate intelligence; it’s also used for profiling by U.S. Immigrations and Customs Enforcement (ICE). Palantir has a history of shady surveillance work, like predictive policing software that was provided to the city of New Orleans for six years before we even knew it existed.

Palantir and Thiel’s integral involvement makes it clear that, at its core, the project is one of surveillance.

Already in use — The HHS Protect Now platform is set to officially launch in the next week or so (past its original launch date of April 20), but it’s already being used by the federal government, according to sources familiar with the project.

The coordinator of the White House’s coronavirus response, Deborah Birx, has been receiving nightly briefings based on data compiled by the platform. Birx often makes appearances at press conferences to discuss the federal government’s mitigation of the pandemic.

Birx’s presentations based on this data analysis are then being used by the president to determine which areas of the United States are ready to reopen.

That’s a lot of power for one program — The Trump administration has no problem piling all of its eggs into one basket. As usual, that basket is one weaved of close advisors and supporters. The exact sources of data for the program are unclear, but they seem to be far-reaching: geographic testing data, hospital inventories, and supply chain data, to name a few. HHS says it has 187 data sets integrated into the platform so far.

“We are using the data aggregated... to paint a picture for the Task Force, and state and local leaders to show the impact of their strategic decisions,” a spokesperson said.

The White House is putting a lot of pressure on the HHS Protect Now project to provide much-needed guidance in slowing the fatal pandemic. Despite the more than 40,000 deaths in the U.S. thus far, the president and many around the country are clamoring for quarantine measures to be lifted.