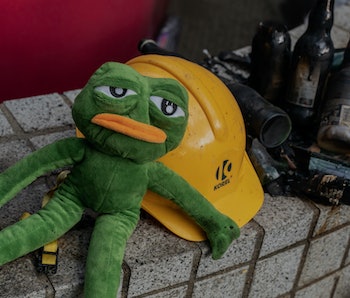 Pepe the Frog was created in 2005 as an innocent-enough cartoon frog. But through no fault of his own, Matt Furie’s creation eventually mutated into a symbol for the alt-right around the time Donald Trump began his run for president.

Cash cow — Furie has more recently tried to reclaim Pepe the Frog in its original image and began selling NFTs of the frog in order to make some money off his work. At the beginning of June, Furie released a set of 100 limited-edition NFT tokens, which include one-of-one drawings and animated GIFs depicting the frog. And he is making a ton of money off the sales — just one of the NFTs alone sold for 10.7 ether, or about $20,000.

NFTs, or non-fungible tokens, are certificates of authenticity for digital artwork. They consist of cryptographic keys that cannot be replicated, which is supposed to imbue the works with value. Furie is only creating 100 NFTs, which can increase in value over time as they trade hands. The hope is that through NFTs, artists could monetize their work better than through digital advertising.

Kill your darlings — On the one hand, using NFTs to enrich Furie for his work is kind of the idea behind the non-fungible token in the first place. While much of the headlines surrounding the tokens have been regarding sales of half-hearted creations by major celebrities, true enthusiasts of the NFT concept hope it will help artists make more money off their hard work.

But some have already criticized Furie for the sales, arguing that he’s making money from white supremacists who use Pepe as a character in offensive digital artwork. He might think he’s reclaiming the character, but neo-Nazi characters continue to use Pepe and the rarity of these NFTs could make them desirable to those types of people. The “About” page of the website itself describes Pepe the Frog as “the most iconic internet creature of all time,” but that’s arguably due to its dark associations.

Either way, it’s hard to knock Furie too hard when he already dealt with so much having to see his character become a symbol for hatred. It just seems like he could have made a new character and people would’ve bought those NFTs just as well.

If you want to learn more about the story of Pepe the Frog, a documentary was released in 2020 that chronicles the entire strange story.