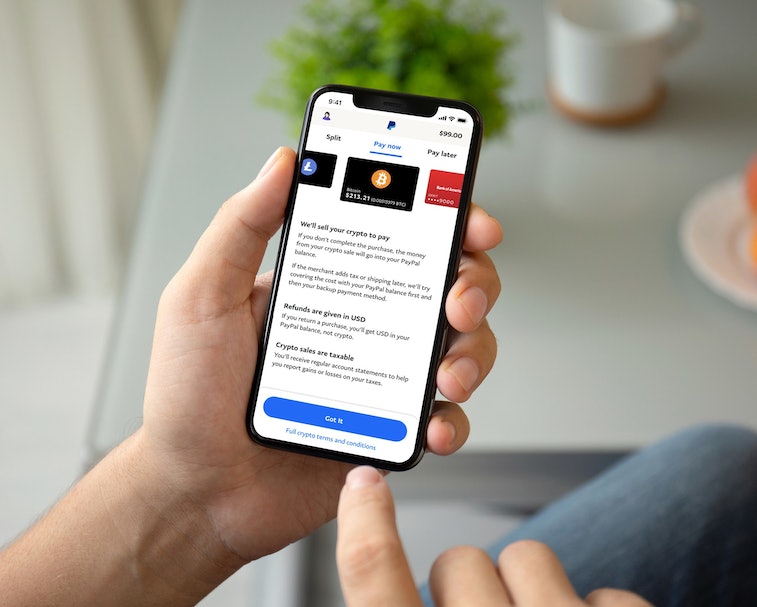 Today marks another significant milestone for cryptocurrency. PayPal announced this morning that users in the United States can now use the company’s app to pay with three of the most popular cryptocurrencies: Bitcoin, Ethereum, and Litecoin.

“Enabling cryptocurrencies to make purchases at business around the world is the next chapter in driving the ubiquity and mass acceptance of digital currencies,” said PayPal CEO Dan Schulman.

This announcement doesn’t come as much of a surprise — PayPal telegraphed the move nearly six months ago. Even so, the “Checkout with Crypto” feature, which rolls out today, is big. As one of the world’s top payment processors, PayPal’s crypto expansion will have far-reaching effects. More than 26 million merchants utilize PayPal’s network.

Crypto for all — The Checkout with Crypto option really couldn’t be easier to use. If you’re holding any of PayPal’s supported cryptocurrencies in your PayPal wallet (Bitcoin, Litecoin, Ethereum, or Bitcoin Cash), the option to use that currency instead of your home currency will be presented at checkout.

PayPal will then convert your cryptocurrency to fiat — that is, government-issued currency, like the U.S. Dollar. This all-in-one conversion / payment essentially lets you pay with cryptocurrency at any merchant that accepts PayPal, whether or not that merchant is interested in the price of Bitcoin.

Users won’t be charged a transaction fee at checkout, PayPal says. The company will set standard conversion rates, though, so it’s entirely possible you’ll lose a few cents in the conversion process.

The hottest thing since cash — After more than a decade of existence, cryptocurrency is just now really picking up speed in mainstream adoption. Last month, Bitcoin soared right through a $1 trillion market cap, despite years of extreme volatility. Big players in the tech world, like Tesla’s Elon Musk and Twitter’s Jack Dorsey, are investing in the currency heavily. And other uses of crypto technology — most notably NFTs — are proving more popular than we ever could have imagined.

PayPal is also looking to add cryptocurrency payment options to popular money-sending app Venmo in the near future. Venmo’s main competitor, Square’s Cash App, has had cryptocurrency features since 2018, and just last week the platform added the ability to send and receive Bitcoin without any transaction fees.

Despite this renewed hype, cryptocurrency is still, for the most part, not accepted by traditional banks and financial institutions. PayPal’s broad use of the technology is a big step toward that kind of large-scale embrace.