“If you’re looking for a terrorist in the world now, you’re probably using our government product, and you’re probably doing the operation that actually takes out the person with another product we built.”

Alex Karp, in a recent interview 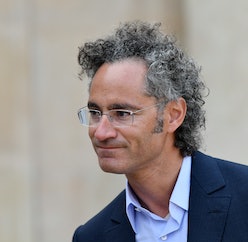 Technology made by data-mining firm Palantir is “on occasion” used to target and kill people, CEO Alex Karp told Axios in an interview broadcast on HBO Monday. He was referring specifically to the targeting of known terrorists around the world.

The interview centered upon Palantir’s longstanding collaborations with the Immigration and Customs Enforcement (ICE) office — work Karp has vehemently defended many times before. Karp’s most recent interview is more candid than most, though, and he reveals glimpses of the toll the company’s contracts with ICE have taken on him and his business.

In the interview, Karp says, "I had people protesting me, some of whom I think ask really legitimate questions. I have asked myself, if I were younger at college: ‘Would I be protesting me?'"

Losing employees — When asked about whether or not he regrets the contracts he’s signed with ICE, Karp said “No, no, no.” But those contracts have taken a toll on his ability to keep a solid workforce.

“I’ve had some of my favorite employees leave ... over ICE,” he says in the interview.

When asked about the protestor’s most valid criticism, Karp answered cryptically: “If you are involved in anything — one instance of injustice doesn’t tarnish every instance of justice.” We’re not entirely sure what that one means, except that it’s a pretty creative way of skirting the question.

(Un)ethical business — Karp says there are plenty of clauses in Palantir’s contracts that keep him from speaking to the particulars of the company’s business. NDAs notwithstanding, Karp is obviously torn over the ethics of Palantir’s work. He never comes out and says he feels bad about the work — in fact, he seems pretty proud of the company’s success. But Karp shows here conflicting emotions about the consequences of that success. That’s rare.

Palantir is booked and busy — Palantir’s technology has most recently been used to track the spread of COVID-19 across the United States. This comes as no surprise, given co-founder Peter Thiel’s close ties to President Trump. The company also teamed up with the U.S. Coast Guard to aid its pandemic response readiness.

So yeah, Palantir’s technology is being used to kill people. We already knew the company was developing AI military tech; this is just confirmation that it’s already very much in use. Karp and his associates aren’t going to let a little ethical dilemma stop their efforts to realize market supremacy, after all.