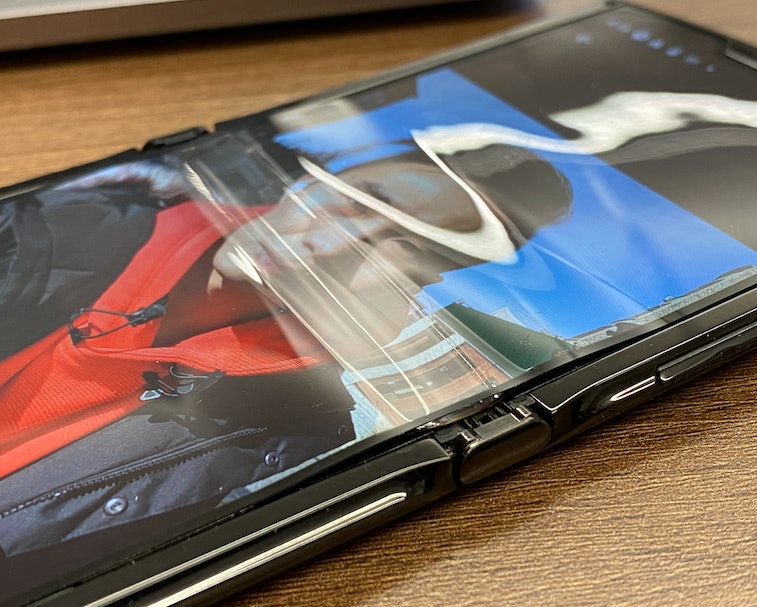 The Motorola Razr nightmare continues. A week after we purchased and reviewed the foldable phone, the plastic OLED display on our $1,500 device is now peeling apart... at the fold. We always try our best to not be alarmist, but when a giant horizontal air bubble appears literally out of nowhere and starts separating the top lamination and the display panel, we have to wonder why anyone would be optimistic about foldable phones.

Let's recap what happened. My boss, Input editor-in-chief Josh, got the Razr a little over a week ago and has been using it on and off since. I picked up the phone yesterday afternoon and only used it to take 23 photos yesterday evening. I brought it home, set up my own Google accounts, and took a few pics of the phone's retro mode.

As far as I could tell, the Razr's display was in perfect condition this morning and afternoon. I even took a photo of the Razr for a friend at 12:18 p.m. ET and there was no damage at the fold.

And then I saw it.

Sometime during my 45-minute train ride from Queens to Manhattan that left at 3:08 p.m. ET, the Razr's display peeled apart at the fold. I have no idea how it happened, but I can promise you it wasn't from impact; the phone was closed in my front jeans pocket the entire ride and there's no visible damage anywhere on the device. (And no, my jeans aren't super tight.)

When I took out the phone at around 3:43 p.m. ET to snap a few selfie comparison photos (😉), I noticed the air gap. The screen was completely warped from hinge-to-hinge with the top layer raised like a poorly applied screen protector.

I'm too scared to even fold up the phone now because the more I close it the wider the spread gets. There's a long streak across the top of the bubble and at first glance, you might mistake it for a scratch. It's not a scratch; there's no physical damage on the surface of the lamination. It's literally the pixels splitting from the two layers.

The screen's damage isn't just cosmetic. The touchscreen is semi-broken; the warped surface makes touches and taps virtually unresponsive, especially when tapping things in a list like inside the Settings app. The top and bottom of the display which hasn't come undone still works, but the middle is not the most responsive.

What happened? — Your guess is as good as mine. The only reason I can think of is a change in temperature. I used the phone to snap eight photos yesterday. It was a freezing day with temperatures between around 28 to 30 degrees Fahrenheit when I was shooting with it.

Then, I brought it home and played with it for what was likely less than an hour in total. My apartment is warm, but not hot. The heat is on, but I wasn't sweating or anything.

Taking it back out into the cold today with the weather in the upper 30s to low 40s could have triggered some kind of reaction that might have loosened the adhesive. Add to the fact that the fold is where the screen's weakest point is — the screen actually gets pushed down into the "chin" of the phone to reduce the amount of creasing that's found in other foldables like the Galaxy Fold and Galaxy Z Flip — and, well, it's a recipe for disaster.

If this is the case, then Motorola has a serious flaw on its hands. Again, the Razr has never been dropped and never been wet, or moist, or even near liquid (it's not water-resistant after all).

The cold might be a problem for all foldables. One twitter user shared an image of his brand new cracked Galaxy Z Flip, which he thinks might have been because of the cold.

Not acceptable — It's one thing to be concerned about the number of folds the Razr's display is rated for, but another issue if the screen starts splitting a week after launch. A $1,500 phone should not break like this. Not in a week, not in a month, and not in six months of even a year. That it did reveals how unfinished and hard it is to make a foldable phone. Like I keep saying, the benefits of having a screen that folds — and the durability challenges it comes with — may not be worth it in the long run when glass-and-metal slabs, for the most part, don't have the same issues.

We have full confidence in razr’s display, and do not expect consumers to experience display peeling as a result of normal use. As part of its development process, razr underwent extreme temperature testing. As with any mobile phone, Motorola recommends not storing (e.g., in a car) your phone in temperatures below -4 degrees Fahrenheit and above 140 degrees Fahrenheit. If consumers experience device failure related to weather during normal use, and not as a result of abuse or misuse, it will be covered under our standard warranty. For more warranty information, please visit: www.motorola.com/device-legal.

We're not doubting that companies put their products through extreme testing conditions. However, tests in a lab aren't the same as real-world usage. Conditions change and there are a ton of variables to account for. Our Razr display broke; it's possible other foldable phones might, too, and perhaps for other reasons. It's just too soon to know how durable foldable displays perform in the real world.