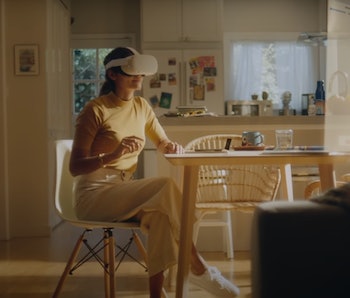 At a Facebook Connect event on Wednesday, the impressive Oculus Quest 2 was unveiled as we said goodbye to the PC-reliant Oculus Rift. Quest headsets will soon benefit new software like Infinite Office that'll enable their use for mixed reality workspaces, while a new fitness tracking feature is coming too, according to TechCrunch. As Facebook sunsets Oculus branding in favor of Facebook Reality Labs, it’s slowly building its own walled garden, and unfortunately for us all, it’s a beautiful sight.

Seeing is believing — In just a few months, our first peek at Infinite Connect has been significantly refined. Though a promotional video uses simulated screens, a demo of Spatial integration for virtual meetings offers a clearer look at where the technology currently is. Infinite Office will still only be an experimental add-on hitting headsets later this year, so we’ll remain skeptical until it’s outside of Facebook’s testing environments.

Infinite Office will allow for the creation of a virtual workspace of varying sizes that can be built out with the equivalent of multiple displays. Using Passthrough mode, users can stay aware of their surroundings and retain a clear view of their keyboard. Instead of trying to solve the problem of virtual typing, Facebook partnered with Logitech for seamless physical keyboard pairing with a dedicated input device.

These typing problems feel pushed aside in Facebook’s Project Aria prototype. The AR glasses feel like an aesthetic mashup between Snap Spectacles and North's Focals (RIP). A few employees will test these prototypes this fall with a range of VR and AR apps as well as work out privacy concerns with the camera and powerful microphones.

Poor Peloton — Facebook also announced Oculus Move, its new fitness tracker. The dashboard is compatible with the Quest and Quest 2, and it allows users to monitor their fitness goals and activity across their apps — from traditional fitness apps to the beloved game Beat Saber.

The news came a day after Apple announced Fitness+ which sent the stock of fitness hardware and software company Peloton tumbling in its wake.

Just when you think you’re out — Guess what? These cool software and hardware updates require a Facebook login. The death of the Rift removes Oculus’ PC-only option, furthering Facebook’s ultimate goal of having its own operating system — likely a closed ecosystem filled with quiet updates like its college-focused Campus and Slack competitor Workplace.

Though Facebook’s reputation is tattered, the inner workings of the Oculus team were so critical to the company’s growth that it was debranded. With impressive hardware and what appears to be the software to back it up, Oculus is the life raft Facebook desperately needs.