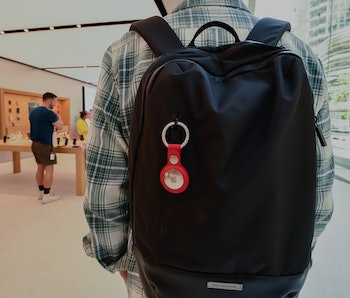 Apple’s AirTags work really well — some might even argue a bit too well. Apart from being able to aid the more absentminded among us, the new devices are prime tools for overly nosey and/or downright abusive individuals looking to keep tabs on people’s locations. Thankfully, Apple seems to have taken notice of this, and recently introduced a couple of new features within its iOS 15.2 beta release in an attempt to address some of these misuses. As first reported over at MacRumors, Apple users can now pull up their Find Me apps and use the “Items That Can Track Me” feature to scan for nearby AirTags not registered to them.

The new update can then instruct users on how to disable those unknown AirTags. AirTags also now begin chiming between 8 and 24 hours of separation from their owners instead of their previous, extremely lengthy 3-day window.

This is all well and good, but as some observers have already pointed out... won’t the new feature also be a boon to would-be thieves? Based on these descriptions, one could hypothetically disable an AirTag that isn’t “theirs” in a stolen item, thereby... um... defeating the whole purpose, right? Are we missing something here, or what?

Still has a lot of good uses — Barring the new, potential Achilles’ Heel of an update (we assume Apple will address this little problem in the near future), we gotta say that the AirTag is still pretty impressive, all things considered. If you’re looking for an item-tracking device, you’re going to have a rough time finding something better than Apple’s offering. The product is still proving extremely useful in novel situations, so like all new smart tech, it’s really all about weighing the pros and the cons for each individual instance. Here’s to hoping Apple addresses the newest concerns even faster than this most recent update.