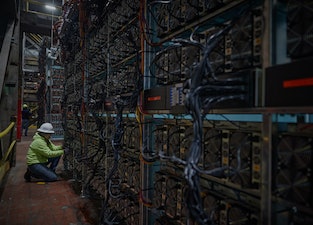 The amount of BTC reportedly mined per day in 2020 by New York's Greenidge Generation plant.

One of cryptocurrency critics’ main concerns has long been the monumental energy consumption required for large-scale mining operations. While it’s true many companies require vast resources, crypto supporters contend that the scale is negligible to the overall financial markets, as well as the industry’s increasing reliance on renewable energy sources. Regardless of opinion, some politicians are looking to pull the plug on major mining endeavors entirely until more research can be done into the situation.

As first reported by The Block Crypto, a new bill put forth within the New York State Senate by Democratic Senators Kevin Parker and Rachel May aims to place a three-year moratorium on all crypto firms’ mining operations with the state, during which time a study would be conducted to assess the industry’s “full environmental impact,” including its greenhouse gas emissions and any effects on water, air, and wildlife. Mining facilities that didn’t meet the state’s eventual environmental requirements after this multi-year pause wouldn’t be issued the necessary operating permits.

New York’s crypto climate — “A single cryptocurrency transaction uses the same amount of energy that an average American household uses in one month, with an estimated level of global energy usage equivalent to that of the country of Sweden,” reads Senate Bill 6486, citing numbers that are of particular concern to the Empire State. As Business Insider notes, upstate New York’s cooler climate is extremely hospitable to large-scale cryptocurrency mining facilities, and the region already has seen a number of companies set up shop there, often in former coal and natural gas power plants.

These new operations require thousands of computers, each of which can emit as much heat as a 1400-watt hair dryer. Dresden, New York’s Greenidge Generation Holdings Plant, for example, runs on natural gas and will reportedly generate enough power by 2022 to hypothetically supply electricity to 85,000 homes. That said, most of the output will stay on-site to power the company’s 27,000 crypto mining computers... and Greenidge Generation is one of almost 30 plants in the region to potentially become converted for cryptocurrency purposes.

Trying to stay on track — Senate Bill 6486 is aimed at helping New York remain on course for its ambitious Climate Leadership and Community Protection Act of 2019. No matter one’s opinion of the exploding cryptocurrency markets, without stricter regulation of cryptocurrency mining, it seems unlikely for the state to meet its purposed goals like an 85 percent reduction in GHG Emissions by 2050, 100 percent zero-emission electricity by 2040, and a total of 70 percent renewable energy reliance by 2030.