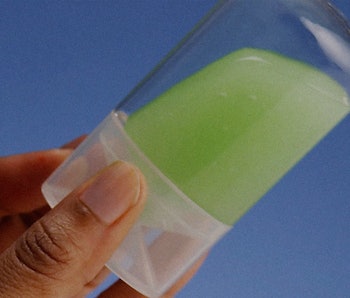 A new company called LiquiGlide has engineered an extra-slippery bottle that could reduce environmental waste and save you money at the same time. By adding a nontoxic layer of lubricant to the inside surface of a bottle, LiquidGlide can eliminate friction and make sure that bottles are disposed without any product left behind.

That’s important because waste management companies cannot recycle materials that still have product in them — at least not without using a ton of water to clean them. Oftentimes recycled bottles actually end up in a landfill because they haven’t been cleaned before entering the recycling stream, and recycling goods is already tremendously difficult to make work from an economic standpoint.

“We all think when we throw a bottle into a recycling bin it will get recycled, but recycling is almost impossible when product is left behind and you need a significant amount of water to clean it,” says Kripa Varanasi, an MIT professor and cofounder of LiquiGlide, in an interview with Fast Company. “So the reality is that some of this packaging actually ends up in a landfill.”

Win win — There’s more to it to environmental picture than the packaging itself, including the product that’s left in the bottle. Your shampoo, too, requires a lot of energy and resources to create. Over a long period of time, and combining everyone’s leftover shampoo, the big picture is probably that a lot is being wasted. If you’re using all the product, that means you’re going to buy less too, and therefore save money.

LiquiGlide previously worked with Colgate on a slippery toothpaste, and says that it’s in talks with personal care brands about conducting large-scale manufacturing. It should be an easy sell considering that many brands want to promote their environmental efforts, but that probably also depends on the cost of the bottles because, you know, capitalism.