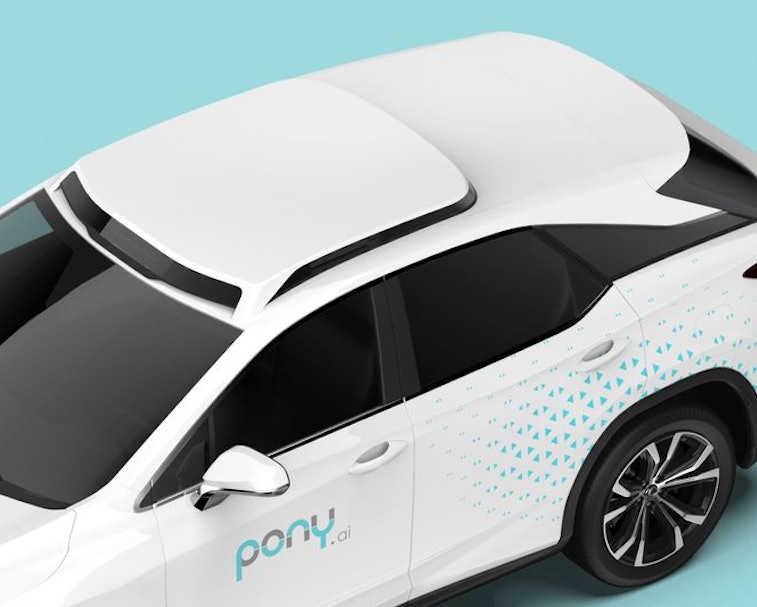 Chinese autonomous vehicle startup Pony.ai has unveiled a new design for its self-driving cars that looks much more pleasing than the vehicles in testing today. The design was debuted as Pony.ai announced a partnership with autonomous vehicle sensor maker Luminar to use its LiDAR Iris laser sensors.

Smooth and aerodynamic — According to Pony.ai, its vehicles are already in use through a self-driving taxi service called PonyPilot in five cities in China and the U.S., and have completed more than 220,000 autonomous rides. A safety driver is seated in the front seat in case the autonomous software errs and they need to take over.

Most autonomous vehicles use a bevy of cameras and laser sensors that capture a 360-degree view of their surroundings and watch out for obstacles. The new design slims down and obscures away all of that gadgetry into a slim profile that extends just 10 centimeters off the vehicle roof. Pony.ai says that despite the slim-down, its cars can still see 500 meters (~0.3 miles) ahead and capture high-quality imagery.

The LiDAR sensors on cars from Waymo and others look like tall cones, spinning as fast as 900 revolutions per minute to beam out light in every direction and measure the distance from objects. One is centrally placed on the roof and then there are two angled sensors on the left and right of the car for side coverage. In its new design, Pony.ai uses smaller, non-rotating LiDAR on the front, back, left, and right, while different sensors on the roof, like cameras, add additional coverage.

Luminar CEO Austin Russell called out other companies in a press release, calling Pony.ai’s design a marked improvement over the “monstrosities that have been on some of the AV test vehicles.”

Engineering challenge — Of course, it’s impressive that Pony.ai is able to slim down its sensor suite, but aesthetics aren’t exactly the largest challenge in autonomous vehicles. Actually making the cars comparable at driving to humans remains difficult. The industry recently saw Lyft and Uber give up altogether after spending years and billions of dollars trying to crack the problem, and other companies like Zoox have sold to bigger companies in order to survive.

It turns out, teaching a car to follow lane markings down a curved road is easy. But drop it in a city where people are constantly stepping in the street, or double parking, or behaving in a host of other unpredictable ways, and the cars struggle to respond safely and consistently.

Waymo recently began operating a limited self-driving taxi service in the suburbs of Phoenix, Arizona. And Tesla continues to roll out successive updates to its controversial “Full Self-Driving” software. But industry insiders have quieted their expectations for when self-driving will reach the masses as they’ve come to terms with the fact that it’s a harder engineering problem than once thought. There’s no denying that autonomous driving would be a major gain for society, though — roughly 3,000 people in America die each year as a result of distracted driving alone.

Russell, the Luminar CEO, says the new slimmer design is a symbol that self-driving is here to stay. The company hopes to get the price of its Iris kit down to $500 per vehicle as more autonomous vehicles hit the streets.