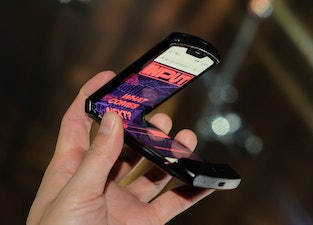 The number of folds the Razr took before it broke, according to CNET

My career in journalism now exists solely to follow the debacle that is the new Motorola Razr, and I'm afraid today brings plenty of disappointing updates about the device. Let's recap, shall we?

The Razr is not really available at any retail Verizon location at this point nor was it available on launch day. After traversing Manhattan and speaking with dozens of stores, it appears that Motorola essentially failed to ship out units for purchase in-store. A CNET writer managed to find a device at a store, but how this was possible is anyone's guess (The Verge also failed to find a unit). Every Verizon location we spoke with said that they hadn't received a shipment, but could take an order for a later delivery (now moved to March). Not just in New York, but across the country.

Speaking of shipments, after touting the launch of the Razr on its homepage yesterday and offering "in-store pickup," Verizon Wireless has now demoted the device to a smaller slot and removed the option to get the phone in person. Its earliest ship date listed is March 3. It's probably also worth pointing out that at no time in the past 24+ hours did Verizon show the device as actually available for pickup in any store anywhere in the U.S.

The phone may also be horrible. CNET tested its device in an automatic folding machine (you know, for folding phones) and found that the device's hinge broke after just 27,000 folds (for reference, the much-derided Galaxy Fold took 120,000 folds before showing problems). As I pointed out several days ago, reports from early shipments (again, WTF?) suggested issues with the hinge and screen, and this seems to reinforce those stories.

Anecdotally, there's almost no one on Twitter talking about getting a Razr. Typically you see people posting about their new devices on launch days, but there's scant evidence that even after some of those early shipments (which must have been very few and far between) that many of these devices are really in-market. You can buy one on eBay for $3,500 right now, if you like.

One final note: the Motorola press folks who we've been communicating with no longer say they can give out review units (is it because they actually don't have devices? we think yes) and their voicemail inbox is full. Welp.

I will continue to track this mess, because as I previously stated, it's my only job now. It's a dirty job, but someone's got to do it.