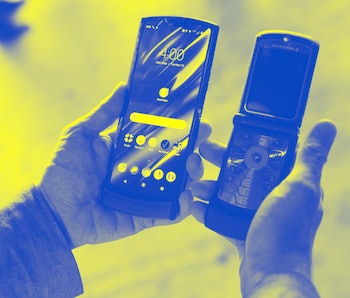 If you were thinking about fixing your Motorola Razr on your own, think again — and hard. A detailed teardown by iFixit gives the Motorola Razr a repairability rating of 1 out of 10. That’s somehow even worse than the Samsung Galaxy Fold, which was only a single point higher than Razr’s abysmal score. That means Motorola now has the dubious honor of being only one of three devices to receive iFixit's lowest repairability score ever (it joins the Essential Phone and HTC One).

So, why is the much hyped-up Razr’s repairability rate so disappointing? Several things come into play but of critical note, the Razr’s most important hardware, including its main battery, is in the bottom half of the phone. Its second battery lies in the top half. So if you want to remove the latter, you need to coerce the display off and take almost the whole thing apart, which sounds extremely tedious. That probably explains why Motorola will do it for you for $299.

More bad news — As iFixit's teardown shows, there's a pesky little gap between the Razr's hinge and the display. The same kind of gap contributed to the "demise" of Galaxy Fold as it can, and does, get filled up with grime and dirt during teardowns. "This gap appears mainly midway through the folding action, and doesn't plague the Razr in open configuration," iFixit reports. "So maybe it's safe? But at $1,500 USD, it's a potentially expensive 'maybe.'" Touche.

To be fair — For what it's worth, iFixit does give Motorola some credit. It notes that because this is a first-gen design, it would be unfair to "expect functionality and repairability to come all at once."

A letdown nonetheless — But even with iFixit trying to be fair, the repairability score doesn't do any favors to Razr's dwindling image. As we mentioned in our review, considering how expensive it is, consumers have the right to expect a stellar foldable smartphone. Instead, as our editor-in-chief Joshua Topolsky lamented, the Razr is a conceptual failure. A 1 out of 10 teardown score just rubs salt in the wound.

Update: An earlier version of this article suggested the Razr was the only phone to have received the lowest score from iFixit. The post has been updated to reflect that two other devices had the same rating.