Most EV owners have no plan to buy another gas-guzzler 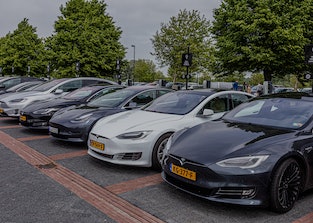 The share of EV owners surveyed who will likely buy another EV.

Most electric vehicle owners are happy with their decision to leave gas-powered cars in the past. In a recent survey by JD Power, 82 percent of EV early adopters reported they "definitely will" consider buying another in the future.

Brand loyalty — That's not a huge shocker — combustion engine cars feel boring in comparison to electric, with their fast starting and smooth, rapid acceleration. Lower maintenance and fuel costs also mean an electric car can be more affordable over its lifetime, even if it's a bit more expensive upfront than a gas car. And, you know, it's good for the environment to stop belching harmful CO2 emissions.

What's perhaps more interesting is that JD Power found most respondents are not particularly loyal to their current brand of EV, and overall satisfaction will matter when it comes to their next purchase.

Growing pains — Tesla has struggled with customer satisfaction over the years, experiencing shifts in the ranks of Consumer Reports's best cars as it races to corner the electric car market while simultaneously working through its growing pains. Whenever the automaker releases a new car, it repeats a pattern of delivering vehicles to customers with a slew of defects, everything from minor door misalignments to poor paint jobs. One early buyer of the Model Y crossover famously had his sunroof fly off shortly after receiving the car. Even after delivery, loyalists have complained about long waits to receive a service appointment.

Electric race — Tesla's market cap of $834 billion, larger than the world's nine largest automakers combined even though it sells far fewer vehicles today, suggests investors believe it will capture much of the gains from the shift to electric. But legacy automakers are finally starting to accept the inevitable, as seen by aggressive rollout strategies in the past year. In Europe, Tesla's market share has fallen over the past year as Volkswagen, Hyundai (parent company of Kia), and others release sleek vehicles that are genuinely competitive with Tesla's offerings. And they aren't exactly known for having the same production issues, thanks to decades of manufacturing experience.

Tesla still benefits from a loyal following, and it's opening new factories in Germany and Texas that will help with costs and localization of offerings (Europeans want compacts, not Cybertrucks).

But cars are expensive investments, and this survey suggests that a lot of people remain practical about what they look for in a car. Tesla will need to worry more about ironing out its problems than maybe it has in the past, when Tesla fanatics have been willing to look past hiccups in order to support the greater mission. And EV fans have had limited choices. That's simply not the case anymore.