The U.S. Army is getting custom HoloLens headsets from Microsoft 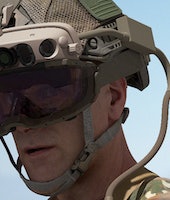 How much Microsoft will receive over ten year contract.

Microsoft has won a lucrative $21.9 billion contract to supply the U.S. Army with custom HoloLens augmented reality headsets. The announcement is a major win for the company, which has been developing the nascent technology for years despite not seeing much adoption.

AR enhancements — As part of the deal, Microsoft will deliver more than 120,000 custom headsets over 10 years. AR headsets like HoloLens superimpose digital objects over a person’s actual environment that can be interacted with using hands or voice commands. An early prototype of the Army’s version displayed an overhead map and a compass, and had thermal imaging to reveal people in the dark.

According to Alex Kipman, a technology fellow at Microsoft, the headsets can provide soldiers enhanced situation awareness and enable better information sharing. Each headset can be used across fighting, rehearsing, and training scenarios.

AR has yet to go mainstream, but companies from Apple to Snap and Facebook are all working on products in the field, hoping the technology will provide a more high-fidelity way of interacting with digital content and blend into people’s everyday lives more seamlessly than smartphones. Similar to how the federal government helped fund the early internet, government contracts could advance development of AR for consumer applications.

Money talks — Tech companies have increasingly been tempted by government contracts as massive new revenue streams. In 2020, U.S. military spending reached nearly $800 billion, according to estimates. As governments at the local and federal level seek to modernize their infrastructure, the technology industry sits ready to provide slick products they’ve been developing for consumers for years — everything from modern cloud hosting to machine learning and other technology, like augmented reality products.

Supplying the military with technology made in Silicon Valley hasn’t come without pushback. Corporations have big influence in today’s society, and just about every time Microsoft, Google, and others have competed for military contracts, workers at these companies have protested the moves, arguing they never would have agreed to create products that could potentially be used towards lethal means.

Microsoft last year won a cloud hosting contract with the Department of Defense that had been targeted by employees. Some employees have since called on Microsoft to cancel its HoloLens contract. But CEO Satya Nadella has held steadfast in his refusal to bow down, defending the contract to CNN by saying “we made a principled decision that we’re not going to withhold technology from institutions that we have elected in democracies to protect the freedoms we enjoy.”

Google has faced similar complaints from employees, which lead it to drop out of the bidding process for the DoD contract that Microsoft won. Workers there have been pushing to form a union, which they hope could provide them a greater say in how their work is used as the business of technology becomes fraught with such moral dilemmas. The union initiative at Google does not have bargaining power yet, however, as less than half of Google’s workforce has yet to join on.