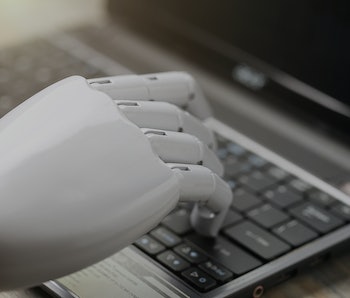 Microsoft is adding predictive typing to Word beginning in March, according to Neowin, which spotted the update in Microsoft's 365 roadmap. The feature is already available in the web version of the company's Outlook email client, with an update coming for Android this month.

Google's own Docs word processor got a similar "Smart Compose" feature last year that was first introduced in Gmail.

With predictive typing, when you begin to write out a common phrase, Word might recognize it and suggest the next word to complete your sentence. Pressing the Tab key accepts the suggestion and fills it in. It's all pretty straightforward — although sad in a certain respect because it's another reminder that we're not as one-of-a-kind as our parents might have led us to believe. We're all typing pretty much the same stuff.

Microsoft says that all processing happens locally on-device, meaning your confidential business communications aren't being sent to one of its servers where it can harvest your trade secrets. If you don't like predictive typing you can turn it off.

Implications — Predictive typing in Word won't suggest entire sentences it thinks you're about to type — the accuracy of artificial intelligence declines as it's asked to make harder guesses based on fewer data. But it's not unheard of that Word might someday be able to write sentences for you. Anyone who's used Smart Compose in Gmail knows that it's fairly good at figuring out how you're going to start or end an email, though it's not always great at the middle bits. Last year, the startup OpenAI released a machine-learning-based text generator called GPT-3 that is remarkably good at producing texts which are hard to distinguish from human writing.

But while tools like GPT-3 are good at constructing coherent sentences, they still stumble at creating prose that's logical. A computer doesn't know how to persuade, or formulate a convincing argument... at least, not yet. For that reason, AI is expected to be utilized more for lessening workloads and increasing productivity. Something like GPT-3 could be used to complete writing that follows a template formula, like reporting a company's financial earnings, while humans continue doing the real work of research and rhetoric. Similarly, predictive typing in Word won't help a college student cheat, but it could help them get their work done faster.