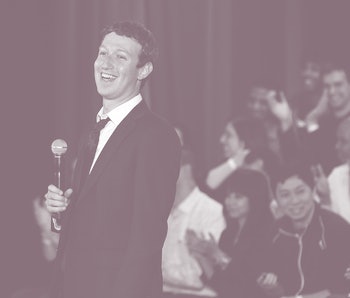 Earlier this week, Facebook made the somewhat shocking announcement that it would be shutting down its facial recognition systems. But now, Facebook’s parent company, Meta, has walked that promise back a bit. A lot, really.

Meta is not planning to hold back its use of facial recognition technology in its forthcoming metaverse products. Facebook’s new parent company told Recode that the social network’s commitment does not in any way apply to the metaverse. The metaverse will abide by its own rules, thank you very much. In fact, Meta spokesperson Jason Grosse says the company is already experimenting with different ways to bring biometrics into the metaverse equation.

“We believe this technology has the potential to enable positive use cases in the future that maintain privacy, control, and transparency, and it’s an approach we’ll continue to explore as we consider how our future computing platforms and devices can serve people’s needs,” Grosse said of the technology.

Sigh. We should’ve seen that one coming. Changing the company’s name did nothing to alter its underhanded business strategies.

LOL JK — Just a week after its rebrand, Meta is making it clear that taking the “Facebook” out of Facebook did nothing to actually change the company. One of Meta’s first actions as a new company is making a big deal out of shutting down its facial recognition tech, only to a few days later say, “Oh, we didn’t mean it like that.”

In announcing the seemingly all-encompassing shutdown, Meta failed to mention a key fact: that it would not be eliminating DeepFace, its house-made facial recognition algorithms, from its servers. We only learned of this pivotal information because Grosse spilled the beans to The New York Times. Grosse did say, at that point, that Meta hadn’t “ruled out” using facial recognition in the future — but he failed to mention that Meta had already begun discussing how it could use biometrics in its future products. Shady, shady, shady.

Shady as always — When Meta first announced news of the impending facial recognition shutdown, we knew the company was choosing its words carefully. There was a very specific narrative it wanted to push forward for the public. Meta highlighted the “careful consideration” it had given the decision, as well as the billion or so facial recognition templates that would be deleted from its servers.

“This change will represent one of the largest shifts in facial recognition usage in the technology’s history,” wrote Jerome Pesenti, Facebook’s VP of artificial intelligence.

Following the publication of Meta’s announcement, various media outlets quoted experts celebrating the decision as a win for user privacy. Which is, of course, exactly what Meta hoped for. We wish we could say we’re surprised by this turn of events. Really it only confirms what we already knew: no matter its name, Facebook cares only about itself.