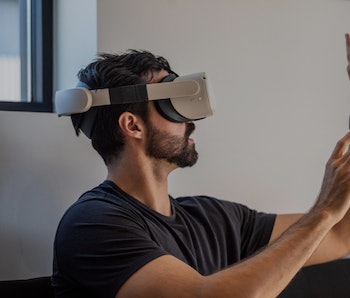 Meta’s next-gen VR headset, codenamed “Project Cambria,” has yet to be shown off in any meaningful capacity. But YouTuber Brad Lynch claims to have been given an early look at Cambria’s structure — and he constructed complete 3D renders based on what he’s seen.

While we don’t know much about the project yet, Meta did confirm the existence of Cambria at October’s Facebook Connect keynote. Zuckerberg says the headset will include high-res video in full color to Cambria’s screens, along with plenty of other cutting-edge features not possible with the Quest 2 hardware.

Lynch’s Cambria renders (done in collaboration with product designer Marcus Kane) do bear striking resemblance to the swirling video Meta provided us last year. The likeness is even more noticeable next to a supposed Cambria tutorial that leaked last year.

The Meta Quest 2 may still be selling in unbelievably high numbers, but Meta is holding nothing back with its next-gen hardware. The metaverse awaits, after all.

Let’s take a look — As a piece of hardware, Cambria is generally similar to the Quest 2. So much so, in fact, that very early leaks about the device called it the “Meta Quest Pro.” (Well-regarded analysts, like Ming-Chi Kuo, have gone on record claiming the product will be known as the “Quest 2 Pro.”)

Both Lynch’s renders and Meta’s teaser depict Cambria as a primarily black device with silver accents around the goggles and straps. Other notable changes are a curved forehead rest on top of the device, which replaces the Quest 2’s third head strap. This could be Meta’s attempt to solve headset fatigue, allowing users to keep the headset on for longer periods of time.

The goggle area of the device has two cameras toward the bottom of each eye section, as well as a sensor array of some sort right in the middle.

A barrier to entry — Meta sees its future as relying heavily on VR. The Quest 2 is great, but, like all computing gear, it will age quickly. If Meta wants consumers to access the metaverse via its VR headsets, it can’t just rely on the Quest 2’s current success.

Whether or not users will actually invest in Cambria is another question entirely. Zuckerberg has said Cambria will be on the “high end of the price spectrum,” which could present a roadblock for less-well-off consumers. Meta will also need to convince Quest 2 owners to upgrade.

Meta is eyeing a 2022 release for Cambria, so we’ll probably get a better official look at the headset sooner rather than later.