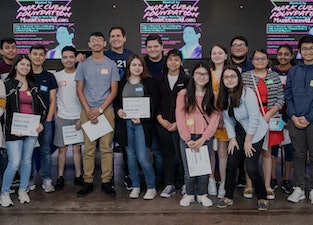 In an interview with The Wall Street Journal, billionaire Mark Cuban committed to putting $2 million more dollars into his AI Bootcamps program. The serial investor, Shark Tank judge, and owner of the Dallas Mavericks launched the program last year to teach lower-income Dallas students about the technology. The free program is now available in five additional cities (El Paso, Chicago, Omaha, Detroit, and Green Bay) with plans to have 1,000 students graduating from the bootcamps each year by 2023.

The slow radicalization of Mark Cuban — As recently as 2014, Mark Cuban had some... feelings about Black kids in hoodies, but he’s generally avoided scandal. Even when his team was revealed to foster a toxic workplace for women and people of color, Cuban was never the target of any accusations.

In 2018, he made Cynthia Marshall the first Black, female CEO of an NBA team in an effort to clean up the Mavericks — and she’s made quick work of it. The Mavericks' brass has never been more diverse and inclusive, and the culture has reportedly shifted in a dramatic way.

The following year, the AI Bootcamps began and emphasized the ethical implications of AI. Researchers have found time and time again that our current AI infrastructures have deep-seated racial and gender biases. To make this technology accessible to underserved communities builds a foundation for a new generation of programmers that will be sensitive to the power AI wields over marginalized communities. Cuban made the program even more accessible by offering a virtual, one-hour bootcamp in April so kids could still learn in quarantine.

As Black Lives Matters protest kicked off this summer, Cuban weighed in by sharing an open letter by Black academic, Emerson College President M. Lee Pelton calling on white people to change. He’s also attended protests with his players and tweeted: “I used to think treating people equally meant treating them the same. Like it was a math equation. I was wrong. I’m learning that treating people equally means treating them with equal amounts of respect, for who they are and what they have experienced.”

This latest influx of cash into the program follows a line of personal shifts in Cuban’s politics, and we can’t wait to see him continue to put his money where his mouth is.