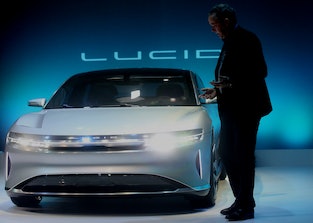 The amount Lucid Motors raised on Monday as it began selling shares on the NASDAQ.

Upstart electric automaker Lucid Motors just went public, selling an eye-watering $4.4 billion worth of shares to fill its coffers as it seeks to become the next Tesla. Founded all the way back in 2007, Lucid has made big promises about its first electric vehicle, the Air.

A luxury sedan, the standard configuration Lucid Air is said to offer over 500 miles on a charge with acceleration of 0-60mph in just 2.5 seconds. The car features autonomous driving technology that uses Lidar sensors, a safety technology that Tesla has opposed putting in its own cars.

Production of the Air has repeatedly been pushed back, with Lucid saying it will now begin in the second half of 2021. The company has more than 11,000 reservations for various configurations of the vehicle, but not all of those reservation holders will necessarily bite the bullet and go through with purchasing the sleek (but expensive) the car when the time comes.

Riding a growing wave of demand — Lucid is going public as investor demand for electric car startups has never been higher. To demonstrate just how much investors want in on the next Tesla, the controversial and embattled electric car startup Faraday Future managed to raise $1.1 billion last week despite flitting with bankruptcy multiple times in recent years while helmed by a founder who fled China in order to avoid paying billions in debt. Faraday has yet to make a car and says it will be at least a year before it can start production.

Other companies like Amazon-backed Rivian have also raised billions, but Tesla remains the only electric car startup to actually go to market and begin selling cars en masse. That company just announced it made a record $1.1 billion in net income during the second quarter of 2021. The only other real EV success stories have been legacy automakers like Volkswagen, which sells some popular electric cars in Europe.

Competition heating up — The Lucid Air isn’t going to be a cheap car. The first configuration to enter production, the Air Dream Edition model will cost $169,000. Not exactly a mass-market disruptor, and at the high end, Lucid faces no shortage of competition. Tesla’s latest Model S Plaid starts at a comparatively cheap (but still not cheap) $130,000. Other luxury sedan competition will come from the likes of Porsche with the Taycan and Mercedes with its 2022 EQS. It’s yet to be seen how many people might choose Lucid over an established incumbent, especially considering how existing players are better positioned to offer after-sales support.

Lucid says that the Air beats the Model S and Rivian’s R1T in battery efficiency and that it is the "quickest, longest-range, fastest-charging electric car in the world.” The car also boasts a “glass cockpit” design.

Fortunately, Lucid should have things easier than Tesla, on the basis that it’s pitching itself as a maker of luxury cars. It’s easier to make an expensive electric car in low quantities than it is to make a cheap electric car at high quantities. The cheapest Lucid Air planned for production, the Pure, will cost $77,400 before incentives.

But expectations are still pretty high with the company now valued at $24 billion. Lucid says the new money will go towards adding 2.7 million square feet to its manufacturing facility in Arizona.