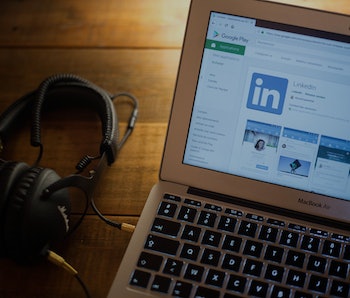 LinkedIn would like to be cool and since it’s open season on TikTok, why not crib a feature from the teens? On Tuesday, app researching wunderkind Jane Manchun Wong discovered a monstrosity being tested by the company: a stacked Discover page. It operates like vertical stories you can swipe between, similarly to TikTok, but instead of video, it’s applied to those corporate-speak blocks of text endemic to LinkedIn. Horrific.

What? — The sneak peek of this feature LinkedIn teased in February shows how posts become vertical cards you can swipe between. It's like Quibi, but for accountants. These stacks of posts can be flipped through one at a time or you can jump between them by toggling little bars on the side. Going one at a time, the cards animate to slide over each other. Hopping across several creates a rapid, vertical carousel effect like the "scroll to the top" buttons made popular by Tumblr in a pre-static-header internet.

Though originally introduced as a more personal product, the cards have a mix of connections and strangers, following in the footsteps of TikTok's "For You" page, which surfaces what's popular as well as the occasional posts from people you follow.

Why? — LinkedIn is considered the Facebook for networking professionals. It’s steadily grown from glorified resume aggregator to bonafide social media platform — for better or worse. Like Facebook, LinkedIn’s design lacks imagination, it refocused on more personal connections well past the time people didn’t recognize half the names in their feeds and stopped using the platform as much, and it definitely wants some of TikTok’s je ne sais quoi.

In a desperate grab for relevance, the platform wants to try to mimic the flow of a TikTok feed. The colossal, obvious problem here is that it’s being applied to text which is often lengthier than what’s found on other platforms. Stacking “clusters” of posts and swiping up and down is just a clunkier way to do something that’s already possible on LinkedIn, namely, scrolling.

If moving away from infinite scroll was the goal, a product like Twitter’s Lists would be more appropriate. People could have a more succinct LinkedIn experience and get the motivational advice they need to operate successfully in the capitalist work culture.

With the feature being dubbed "Discover," however, it's clear that LinkedIn wants the youths and the advertisers that come with them. In addition to getting more eyes on top contributors' posts, LinkedIn would also get a new way to serve ads and learn more about its users. The platform is gambling on "a full-screen ephemeral format" appealing to Zoomers entering the workforce, but it misunderstands the draw of stories elsewhere while throwing its loyal base a serious curveball.