Lime new e-bike has a swappable battery and (finally!) a phone holster 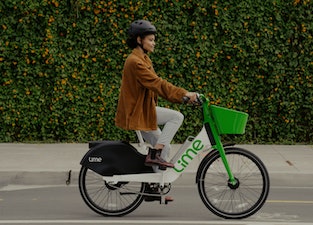 Lime, the e-transport company known for its dockless scooters, is introducing a fourth-generation version of its popular e-bike. The latest version is a significant upgrade to the previous model, with a phone holder, a more powerful electric motor, and swappable batteries.

Along with the new bike, Lime announced it will be investing $50 million in its e-bike service this year. Most of that money will go toward upgrading bikes in existing cities and expanding to an additional 25 cities this year — effectively doubling the number of cities where Lime bikes are available to rent. Most of the new cities will be in Europe and North America, with a few in Australia and New Zealand, too.

Lime was finally profitable again at the end of 2020, and now the company is putting that money to good use — expanding its efforts and upgrading its already-great hardware will continue pushing the company forward.

Perfect for city travels — The updated version of Lime’s e-bike doesn’t look all that different. It’s just as chunky and green as ever, but it’s been tweaked in meaningful ways. The new bike is more user-friendly overall, with a built-in phone holder (no more juggling to check on your GPS!) and a secure electric lock.

Those who have ridden Lime’s bikes in the past will be pleasantly surprised by the upgraded automatic two-speed transmission, which replaces the previous generation’s manual gears. Hills in particular should be much easier to traverse.

The removable battery, though not exactly sexy to look at, is also a big step forward for Lime’s bikes. As the company notes, this feature will cut down on operational overhead, especially in reducing the number of van trips needed around the city to keep bikes charged.

Biking into the future — Many people might recognize the Lime name from its line of electric scooters — those dockless pests often strewn across city sidewalks, more obstacle than mobility. Lime realized the limited returns on that program about a year ago and quickly pulled its scooters from several cities in the U.S.

Now the company is doubling down on its e-bike expansion instead. There’s a great chance the company will benefit from that decision, given its e-bike success thus far, and consumers will have a less stressful time getting around.

Lime hasn’t put all its eggs in just one e-bike basket, though; the company’s new fleet of electric mopeds is rolling out this year, too.