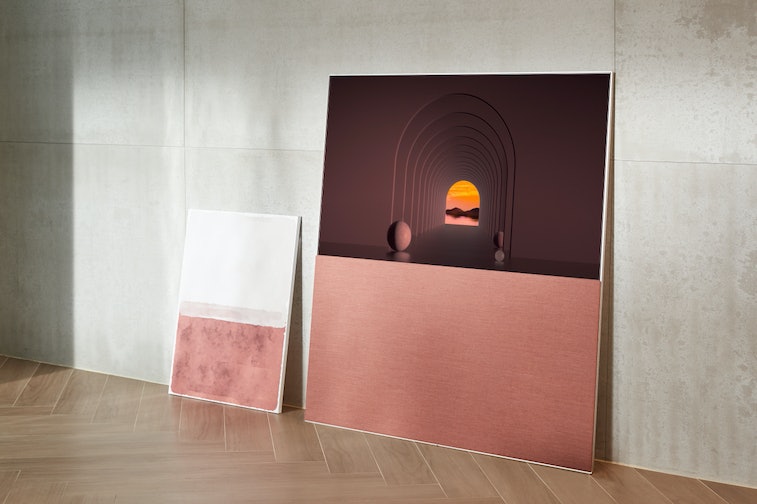 LG will be unveiling a slew of new televisions at this year’s CES, and, as tradition dictates, they’re much stranger than the TVs you already own. This year’s addition to the LG oeuvre is a 65-inch flatscreen with a slide-up fabric cover for all those out there who just can’t stand to look at their TV when it’s off. Or something like that.

The Objet TV is, as the name suggests, the latest addition to the Objet collection, which seeks to create a lineup of “personalized, stylish, and functional home appliances.” Hence the fabric cover. Like the $100K rollable TV, the fabric cover can be adjusted to different levels, showing off just a slice of the screen, if you so desire. It comes in three colors, all made by Danish company Kvadrat: beige, redwood, and green.

That cover is the Objet TV’s biggest selling point. It’s otherwise a pretty standard, high-end TV, with a 65-inch OLED panel and an 80W, 4.2 channel sound system. Don’t worry, though — LG has even weirder options in the pipeline for those looking to buy something more tech-forward.

Stand by me — The other television LG will be showing off at CES 2022 is pretty much the polar opposite of the Objet. Rather than hiding itself, this thing wants to make itself very much known.

That’s because it rolls around with you. The StandbyME (stylized just like that, for some reason) is a 27-inch TV on a heavy base with concealed wheels. It’s battery-powered and should last about three hours, LG says. The display rotates, so you can watch in either landscape or portrait orientation — perfect for those mid-day TikTok binges.

All about the chic appliances — We’re living through a home appliance renaissance of sorts. Our technological innovations have, in some markets, reached a zenith of sorts — in televisions, for example, 8K resolution is the latest and greatest, but our eyes can barely even process it.

That leaves lots of room for innovation in other aspects of new tech. In many cases, this aesthetic innovation has trended toward camouflage; we want our appliances to blend in seamlessly with their surroundings. Or, at the very least, for them to not look like appliances.

There must be some market space, if highly respected consumer tech companies are rushing to fill it. But sometimes these “innovations” aren’t all that exciting, really. You’re telling me the most exciting product you’re unveiling this year is just a normal TV with a fabric cover?

Even when they are cool or interesting, they’re usually very expensive. The rollable TV retails for $100,000. We don’t know how much the Objet TV or the StandbyME will cost just yet, but there’s a good chance they won’t exactly be affordable.